Humans are so last century. As anyone on the internet knows, cats and dogs are the future, and Acer has announced it is seizing this massive opportunity.

At a conference today in Berlin before the consumer trade show IFA, Acer CEO Jason Chen announced that his company had identified “petware” or “petwear” (could be either, I guess) as a $20 billion market opportunity for the Taiwanese computing company.

To address this market, Chen said Acer had acquired crowdfunded Pawbo to launch a new hub of connected pet products. He did not say how much Acer paid.

But on stage, he did take the wraps off a new line of connected pet products. 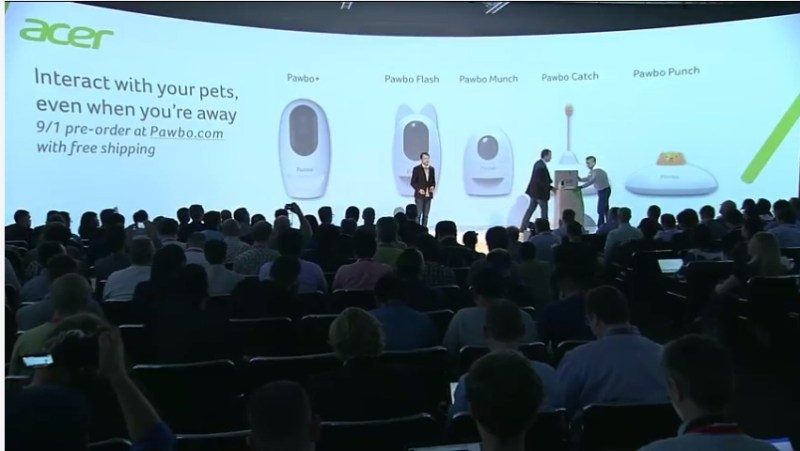 These started with an upgraded version of of Pawbo’s original product, a connected pet monitor. Behold: the Pawbo Plus. It is now also an Internet of Things connected hub. Woof!

Among the new features are a better camera, and the ability to allow eight people to stream the feed at the same time. Plus, you can connect other cameras around the house to make sure you can watch your pet everywhere all the time. And you can store the feeds in the cloud and share the video with friends!

Then, there’s Pawbo Flash, which is an infrared light you can connect to Pawbo Plus so you can watch your pet all the time in the dark.

Next, there’s Pawbo Chase, a little flag that you can control with your smartphone to wave at your cat. Or, as Chen put it: “It’s a cat teaser.”

Finally, there’s Pawbo Punch. It’s a little connected doodad where a mouse pops up, and then the cat tries to swat it or pounce on it, and then it disappears, and then you can do it all over again and watch on your Pawbo Plus and share with all your friends on Facebook and get lots of likes.

With humans slowly ceding control of the planet to pets, and with humans buying fewer PCs and smartphones these days, this shift to focus on our furry future potential overlords makes sense. That said, the impending battle for supremacy between pets and robots promises to be a long and costly affair.