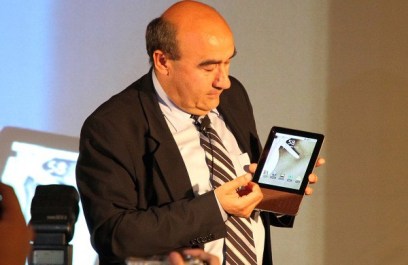 Acer’s long-teased tablet PCs will finally launch on November 23 in New York with a price range from $299 to $699, the company’s CEO Gianfranco Lanci told Dow Jones.

Unfortunately, there’s not much else to go on with the report — and little that counters widespread doubt that MIcrosoft can compete with Apple’s iPad.

Given the price range described, Acer’s Gianfranco could be referring to a series of tablets at 5-, 7-, and 10-inches that Acer was reportedly gearing up to launch before the end of the year.

The long delay in the introduction of a modern Windows tablet was highlighted as part of an in-depth report by Reuters on Microsoft’s struggle to stay relevant. In July, Microsoft CEO Steve Ballmer promised that tablets powered by his company’s software would “sell like crazy,” a claim that was met with skepticism by Wall Street analysts.

It’s still unknown which operating system the company will rely on, but Google’s Android is the likeliest bet. The most recent rumors about Acer’s tablets also mentioned that the company may introduce a Windows 7-powered device to test that market. With the generally poor reception of HP’s Windows 7 Slate tablet, I suspect Acer may be having second thoughts about that plan.

Given Barnes and Noble’s surprise announcement of the Android-powered Nook Color ereader/tablet yesterday, as well as Samsung’s upcoming Galaxy Tab devices, we’re likely going to see many Android tablets solidify as more than rumors this holiday season. Some manufacturers like LG and Motorola are still waiting until 2011 for the release of Android 3.0, bypassing the work required to squeeze current Android builds into tablets.