Computing giant Acer made a plethora of announcements at consumer electronics exhibition IFA in Berlin today, some more notable than others.

Alongside a new tablet for gamers, a convertible Chromebook, and new smartphones, the Taiwan-headquartered tech titan unveiled a slew of new laptops and desktops — one of which is a modular unit that lets users customize the machine in blocks. 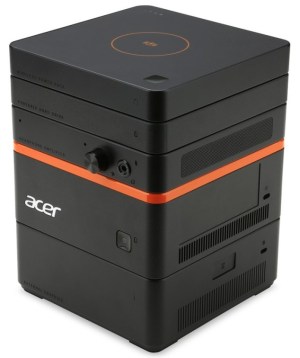 With the new Acer Revo Build Series (M1-601), Acer is bringing a mini PC to market that lets users tailor the unit without having to open up the machine.

The primary lower unit is a mere 125mm x 125mm square, and comes with a Intel Pentium or Celeron processor and “up to” 8GB DDR4 of RAM.

But this base unit can be built upon. For example, one block may be a 500GB/1TB swappable hard drive, letting users upgrade their on-board storage with relative ease. There’s also a sound module and power bank module, the latter of which also serves to wirelessly charge a smartphone.

No cables are involved in building your stack — you align a series of pins with the block below, and magnets are the glue.

This Lego-like design has become an increasingly popular approach in recent times, with Google’s Project Ara perhaps the highest-profile example from the smartphone realm, though it has been delayed for now. Elsewhere, Nexpaq recently smashed its $50,000 crowdfunding goal to build a modular smartphone case.

Over time, Acer said, more modules will be added, and the company specifically asked consumers to make suggestions.

The Acer Revo Build launches across EMEA (Europe, Middle East, and Africa) this October, for €199 ($225). It will then hit China in December for ¥1,999 ($300). It’s worth noting here that exact prices, specifications, and availability will vary from region to region.

Word on the street is that the Revo Build will be available in the U.S. eventually, though this machine very much feels like it’s aimed at emerging markets, where consumers will really appreciate buying a basic machine and upgrading it themselves when they can.