If you’re a digital marketer, you live and die by your funnels. Today, Act-On added a visual funnel building and tracking tool that will — hopefully — ensure you live.

“It’s a combination of a report and an analytical tool,” Act-On CMO Atri Chatterjee told me yesterday. “It lets you customize your business process, visualize the stages you want to watch, and track those stages in real time.”

For most marketers, funnels will involve some form of opening stage in which anonymous visitors (“suspects” in Act-On parlance) or other initial interactions with your company trend towards a deeper and deeper relationship, via logging in, via accessing content, via socially sharing data, perhaps requesting more information or downloading a white paper, until the penultimate stage — becoming a hot lead or open opportunity — and the ultimate stage: becoming a customer.

I watched as Chatterjee edited and adjusted a funnel:

Unveiled today in the new Act-On, funnels can be built for high-level marketing processes, or for specific, defined, limited campaigns.

“Funnels can accept data from multiple places, such as your marketing automation system, your CRM system,” Chatterjee says. “We track and measure that, and measure velocity over time. Once you create a funnel it goes into listening mode, taking continuous snapshots so you can track changes over time.”

Looking for a marketing automation system?
Get G2 Crowd’s Grid for Marketing Automation

Of course, Act-On, which recently raised $42 million, is not the only marketing automation vendor with funnel-tracking capabilities. 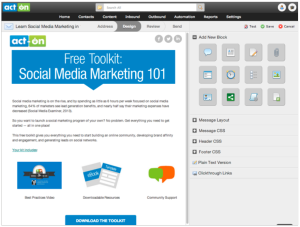 However, as a mid-market vendor, the company faces a difficult challenge: competition at both ends of the spectrum. At the high end, you’ve got almost infinitely customizable funnel creation and tracking. At the low-end, you’ve got pre-built funnels. One is super-powerful; the other super-easy.

Chatterjee thinks Act-On has split the difference and created a product that works for its defined market.

“A lot of the other systems provide a pre-built funnel — the most common one. But you can’t customize it and adapt it to your process,” he said. “Or you have some systems with a lot of power, and give you integrations, and you can create all these reports and analytical tools … but that’s not something a marketer can do. You need IT people involved.”

In addition to the new funnel tool, Act-On also announced new content creation capabilities that allow marketers to build just about any kind of web or email content in Act-On via drag and drop, be able to deploy it to their WordPress or Drupal-powered site, and know that their content is responsive and will “just work” on any device. In addition, a plug-in for WordPress will allow marketers to simply use that system directly while still enjoying the ability to have Act-On scan the material for SEO compliance and other factors, and get an actionable report back on any fixes or updates that might be warranted. 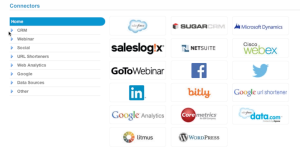 The company also debuted a similar tool for Gmail, allowing sales and marketing people to use the tool they already do, but still have access to Act-On’s tracking capabilities and pre-built templates. The Gmail integration joins a previously-available Outlook tool.

Interestingly, Act-On has also built a compatibility engine for CRMs that allow you to plug and play with different CRM systems as you wish. Essentially it’s an abstraction layer for CRMs so that you are no longer tied to any particular CRM via complex and challenging integrations.

Finally, the company — which already had received top marks for its CRM integration tools — also beefed up its integration capabilities, adding native integrations with various CRM systems, which now include SugarCRM and Microsoft Dynamics as well as Salesforce and others.