The ad asserts that the advertising industry has already lost the debate over whether consumers should be able to block their annoying ads on mobile.

The ad references the advertising industry’s main trade group, the Interactive Advertising Bureau (IAB), likening it to a fallen Sonny Liston lying on his back at the feet of the great Muhammad Ali. The ad reads: “The @iab knew we could block. Now they know we can punch, too.” 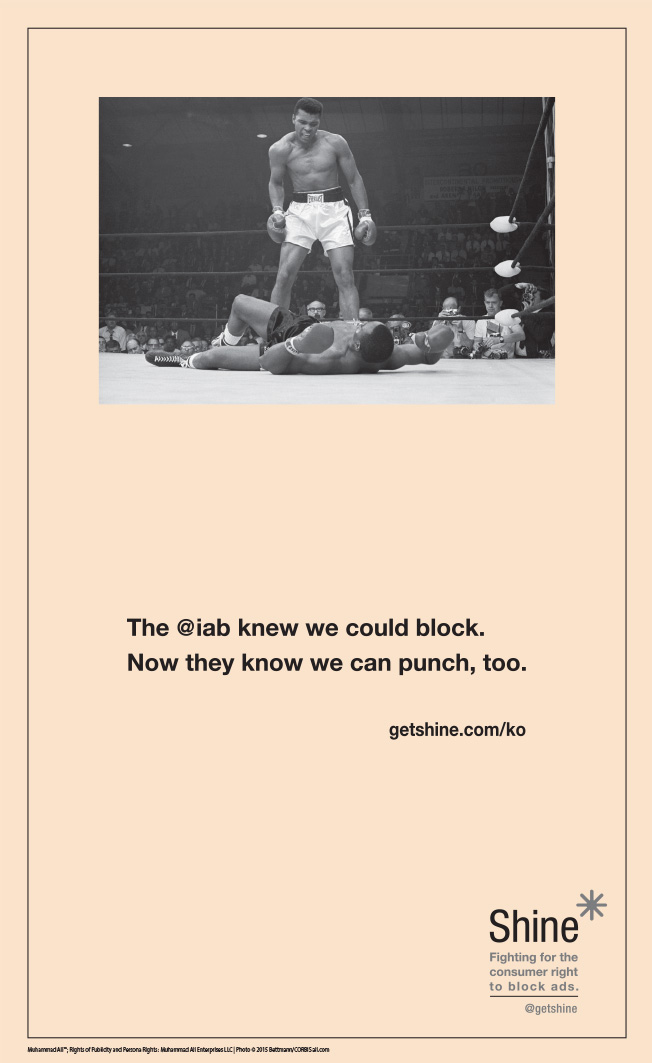 The ad may further stoke the flames around the issue, which is being hotly discussed this week at the Ad:tech conference in New York City.

Apple kicked off the debate by enabling ad blockers in its new iOS 9 mobile operating system, which became available in September. This opened the door for players like Adblocker Plus to block ads that might lessen users’ iPhone experience.

IAB CEO Randall Rothenberg had this to say about ad blocker apps in a September Advertising Age op-ed:

Shine counters by saying this on the website linked from today’s ad:

…the fact is that ad tech brought about its own inevitable demise by coming to depend on dirty revenue generated through intrusive practices that abuse consumers and defraud advertising businesses.

Shine’s technology is a little different than consumer ad blockers like Adblock Plus, which can be installed on mobile devices to block browser ads. Shine operates at the wireless carrier level to block ads, so some disruptive or otherwise obnoxious ads never get seen by the carrier’s mobile carriers.

VentureBeat interviewed Adblock Plus, the most popular consumer ad-blocker app, on Wednesday to get its side of the story. That story will be published on VentureBeat tomorrow.