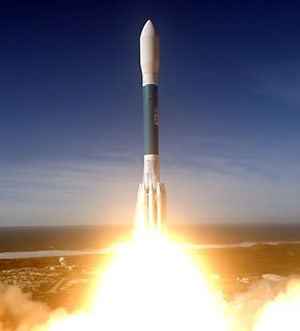 Rocket Fuel, a startup claiming to bring honest-to-God rocket science to the online advertising world, has raised $10 million in its second round of funding.

The Redwood Shores, Calif. company says it uses technologies like artificial intelligence, machine learning, and statistics to figure out the best placement for a display ad. It either buys impressions on an ad exchange, or directly from online publishers. A number of ad optimizers look at user behavior, said chief executive George John, but Rocket Fuel looks at behavior, context, geography, demographics, and more. It can also give advertisers immediate feedback on how their ads are performing.

You can read more about Rocket Fuel’s approach in a column that John wrote for VentureBeat earlier this year. Oddly, it’s not the only company connecting advertising and space exploration. DataXu says its algorithms come from the technology involved in NASA’s Mars mission plans. In John’s case, the space connection comes from his own work history — while he was doing graduate work in AI, he also worked summers at NASA. John has also worked at Yahoo, Salesforce.com, and IBM.

The company is already growing fast, John said, earning 10 times as much revenue in the second quarter of 2010 as during the same period of 2009. The funding should help the company add sales offices in the United States, expand into Europe, and also improve its optimization features for mobile and video advertising.

[image via US Air Force]