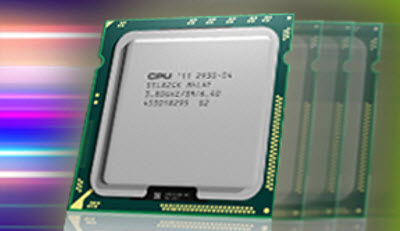 Adapteva has designed a chip with 64 computing brains for smartphones, tablets and super computers. The chip design company calls the new Epiphany IV microprocessor the “most energy efficient microprocessor” in the world.

The Lexington, Mass.-based company announced that its fourth-generation Epiphany chip will have 64 cores on a single chip. The chip can execute 70 gigaflops of computing performance while consuming a single watt of power. That’s actually a lot of power for a smartphone, but the performance can be dialed down to handle tasks more efficiently. The chip could be used in a wide range of mobile-focused markets, including running applications for machine vision, radar, speech recognition, software defined radio, security and medical diagnostics.

Adapteva was founded in 2008 and it has managed to design four chips with a tiny team of just five employees, said Andreas Olofsson, chief executive of Adapteva, in an interview. That is unheard of chip circles, where it often takes hundreds of people to complete the design of a full-fledged chip.

But Adapteva is focused on designing a chip that others can license and then take to market. Olofsson is also a veteran chip designer. He was previously part of a 100-person team at Analog Devices, but he broke off to do Adapteva. He designed the first prototype chip himself and brought on more people to do follow-ups. The company’s third chip was completed in May and it is the first commercial device.

Olofsson said that Adapteva got the power of its chip much lower by tossing a lot of things out. The chip won’t run a full operating system such as Linux; rather, it functions as a companion chip, or co-processor, sitting alongside an Intel or ARM-based microprocessor. Olofsson said the chip didn’t need a memory management unit because it wasn’t running the full Linux OS. And the chip didn’t need a large cache to run big applications either.

“We just kept throwing more features out, and with every feature we threw out, we saved more power,” Olofsson said. “At the end of the day, we have a lot of energy efficiency.”

Olofsson said the company was able to get by with a small team because it reused a lot of its design components across the chip. The chip operates at up to 800 megahertz and is built with a 28-nanometer manufacturing process.

Nathan Brookwood, a chip analyst at market analysis firm Insight64, said that he was impressed that Adapteva could design a chip so small, given the performance. He said there is nothing wrong with the companion chip approach, considering that graphics chips often have to be paired with microprocessors in personal computers. Brookwood said there are some gaps in the available information as to whether the companion approach will succeed. As for the supercomputing side, Brookwood said the approach looked promising.

Olofsson said the processor shows how it will be easy to beat the 2018 goal of the Defense Advanced Research Projects Agency, which wants to hit 50 gigaflops per watt. The company says it can do server-level computing on mobile devices.

The previous-generation Epiphany III chip was able to match the performance of some of Intel’s Xeon processors while consuming less than 2 watts of peak power. The Epiphany IV chip will be able to outdo those benchmarks by four times using the same amount of power. Chip samples will be ready in the first quarter in 2012.

The venture was self-funded at first and then Olofsson raised $1.5 million from Bittware, a digital signal processing board maker that also became a customer. Bittware makes boards for military applications. Olofsson said the company is looking to raise more money. Rivals include Intel and Tilera.