The aptly named Trusted News add-on was built in conjunction with MetaCert Protocol, a blockchain-based online protocol that records trust data relating to websites, apps, social media accounts, and more. The crowdsourced reputation registry can be used by anyone from crypto exchanges to internet service providers (ISPs) and is designed to thwart all manner of online chicanery, such as phishing attacks and, crucially, fake news.

The MetaCert Protocol pools trust and reputation data from independent fact-checking bods and news sources around the world, such as Snopes and PolitiFact, and Eyeo turned to the protocol to develop its fake news-spotting extension.

Trusted News, which is currently still a beta product, helps users see at a glance whether a website is generally trustworthy or has a history of making dubious claims. In this case, you’ll see that MailOnline is flagged as “biased” and allocated an “orange scale” icon. Trusted News reports: “This website contains politically biased content or promotes unproven or skewed views.”

Conversely, for those who may be prone to confusing humor with hard news, Trusted News flags the Onion as “Satire,” gives it a blue smiley, and notes: “Theonion.com publishes satirical content and is not intended to be used as a source of actual news.” Above: The Onion: Lolz

If a publication is deemed trustworthy, it recives a little green tick, while those that are entirely untrustworthy are given a “red exclamation mark.” 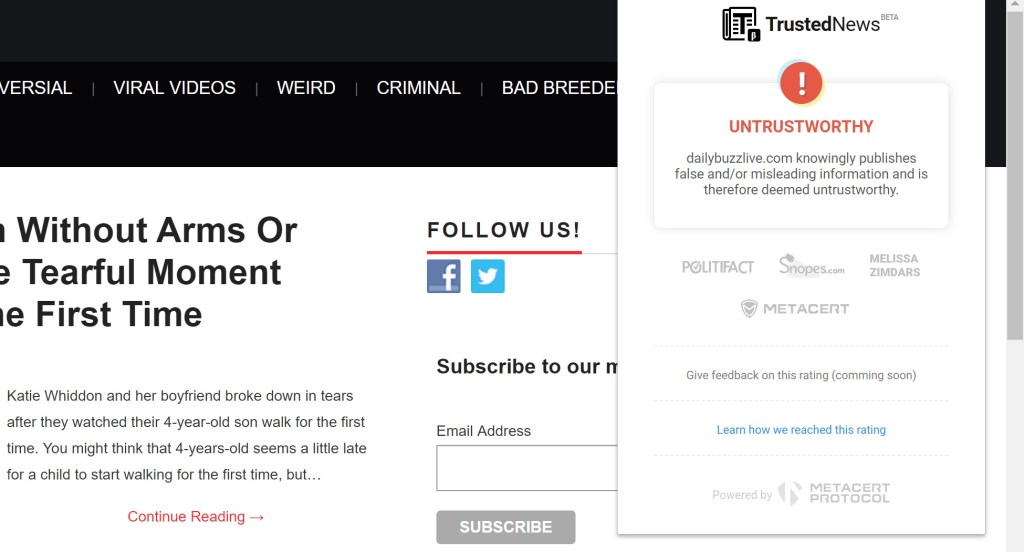 Above: This site is not to be trusted

Trusted News also metes out a “red bullseye” for clickbait sites, a “gray U” for user-generated content, “red x” for malicious pages, and “gray dash” for those that have yet to be ranked.

“Trusted News is still new, but there are two secrets in the sauce,” according to Eyeo CEO Till Faida. “First, it is a solution for users, not an ambitious plan to reform platforms or information sources; and second, it separates the fact-checkers determining what is fake and what is not from the actual product applying the determination.”

Trusted News users will also soon be able to contribute to the Metacert Protocol registry by giving their own feedback on a specific rating that’s been provided through the service.

Eyeo has courted controversy in the past for its popular adblock smarts, which it monetizes by charging online ad companies such as Google and Facebook to bypass through its whitelisting service. It also makes money by charging a commission for the Flattr micropayments service aimed at content creators.

Now, with all the major technology companies striving to fix their fake news problems — including Google, Facebook, and Twitter — Eyeo is looking to leverage its clout in the online sphere and play good guy in the battle against bogus news sites. And it will do so for free.

“Fake news is profoundly affecting our society and our ability to make informed decisions as citizens,” Faida added. “While we don’t profess to have solved the entire problem yet, we are proud to launch Trusted News as a first humble step that we will continue to improve as it pushes beyond beta.”