Force Factor, the performance supplement company whose Test 180 Ignite product promises to increase your testosterone 99 percent and make you “100 percent man,” spent at least $1.7 million on ads at ESPN.com last quarter, beating out Cadillac, AT&T, Google’s Chromebook, and Red Bull to be the current reigning champion of the sports site’s prestigious advertiser list.

How do I know?

New York ad startup BiScience’s new product, AdClarity, monitors 5.1 million ads in over two million campaigns from over 300,000 advertisers on over 7,000 publishers’ sites. And AdClarity connects with major ad inventory exchanges, monitoring pricing. By combining the two, the tool gets a very good look at what has traditionally been very obscure data: How much your competition is spending (if you’re an advertiser) and how much your competition is making (if you’re a publisher).

Above: The number of campaigns on ESPN’s global sites.

Using Ad Clarity data, for example, you can tell that Yahoo probably made north of $7.5 million last month on its home page alone, with four campaigns, an average CPM of $1.10, and 168 million pageviews. Or that ESPN’s average CPM was higher, at $1.39, and that its U.S. site alone ran 609 campaigns in the last three months for its 35 million monthly visitors. 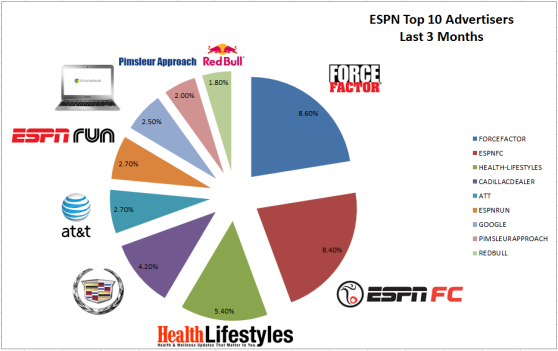 Above: ESPN’s top advertisers in the last three months.

I wondered to BiScience CEO Kfir Moyal who it was most valuable to: agencies, publishers, or advertisers?

“I think advertisers/agencies are the sweetest spots as it plays a key consideration for them while planning and deploying campaigns,” Moyal said. “Having said that, publishers always like to compare monetization alternatives and profitability so their use case is pretty strong as well.”

Agencies can use the tool to plan their media spend, Moyal said, while in-house advertisers can cut out the ad exchange middlemen and deal directly with publishers — with a lot more intelligence to inform their negotiations.

Above: A report on some Yahoo pages AdClarity monitors.

How exactly does AdClarity manage this?

Moyal didn’t want to get into exact details, but essentially the company maintains its own proprietary RTB (real-time bidding) engine which is integrated with multiple ad inventory sources. Essentially, the company knows what advertisers are paying and publishers are making by having a seat at the table during the lightning-fast digital negotiations, and seeing who has the winning bid. In addition, the company monitors thousands of publishers pages to see what actually runs

That data is sliceable by day, week, and month, and also provides trending information, Moyal said, which is helpful to advertisers who are planning campaigns.