[Update: See below. This is not owned by Adify, as we’d originally implied] 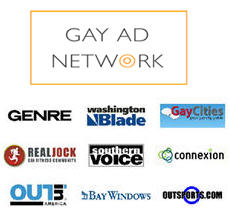 Adify, an online company that is building ad networks for specific niches, has just announced its latest: the Gay Ad Network.

Adify, a Belmont, Calif. start-up which launched last year, and which got $19 million in financing a few months ago (see our coverage) is a small player relative to the other big ad networks.

This is a smart move, though. We’re in the age of niche advertising, and this lets gay and lesbian publishers, advertisers can more easily reach online gay audiences, for which there’s bound to be a solid market (albeit seedy one, if the comment below is any measure).

[Update: While Adify’s platform is hosting this, the network was actually launched Mark Elderkin, former president of PlanetOut and CEO and founder of Gay.com, which he built into a large gay online community. The property is in fact not owned or operated by Adify; rather merely uses its technology. Gay Ad Network has its own sales, operations and marketing teams and Adify’s technology handles things like ad serving, billing, reporting and campaign management.]