Adjust, a mobile measurement and fraud prevention company, said that Indonesia, Brazil, and South Korea are the fastest-growing countries when it comes to app market growth. This comes from its annual Global App Trends report, providing a snapshot into the global mobile app economy.

Adjust’s report is based on anonymized data collected over 2018 and across the top 1,000 best-performing apps on the platform. The data set spans over 7 billion installs and 120 billion sessions.

The report marks the debut of Adjust’s new Growth Index, bringing unique context to install numbers and shedding light on the real growth rate for apps across verticals and countries. 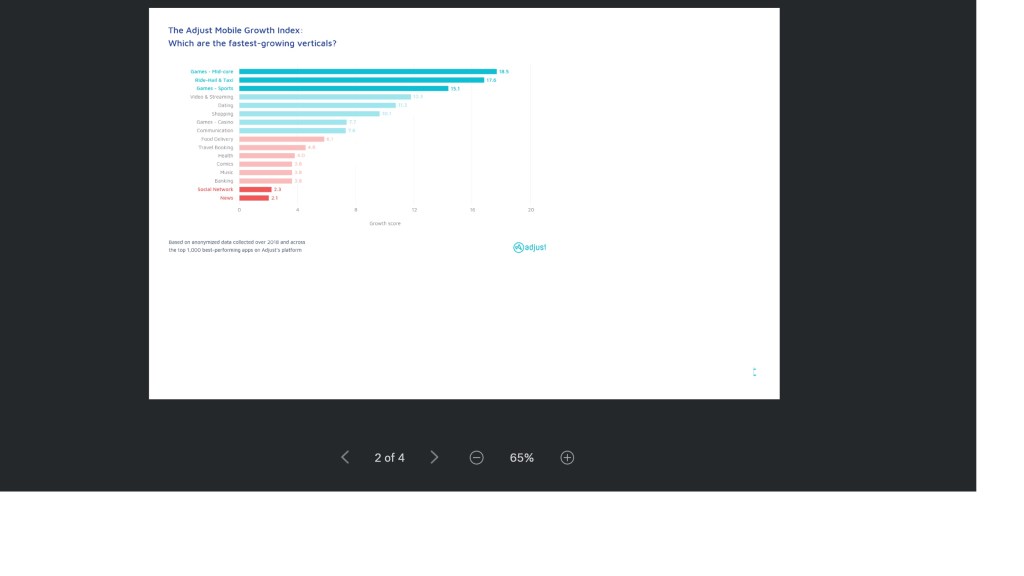 Above: Adjust identified the fast-growing verticals.

To calculate growth, Adjust used the total number of installs per month and divided them by monthly active users (known as MAU) for each country or vertical in its data set. This showed the rate of growth that apps receive from installs against their monthly active user base.

The findings showed that:

Do these fast-growing verticals retain users?

The data also shed light on retention rates and session data — which helps distinguish if the strongest growing app categories are also the biggest crowd-pleasers.

The report showed that overall, from Day 0 (date of install) to Day 1, apps lose on average, 69% of all their users. From Day 1 to Day 7, overall average retention decreases to 21%. On average, an app loses 79% of users in the first week of install. However, News (31%) and Comics (28%) apps have the highest retention rates by Day 7 of install, each having around 2.2 sessions per day on average.

Ad fraud still a thorn in the side of all verticals 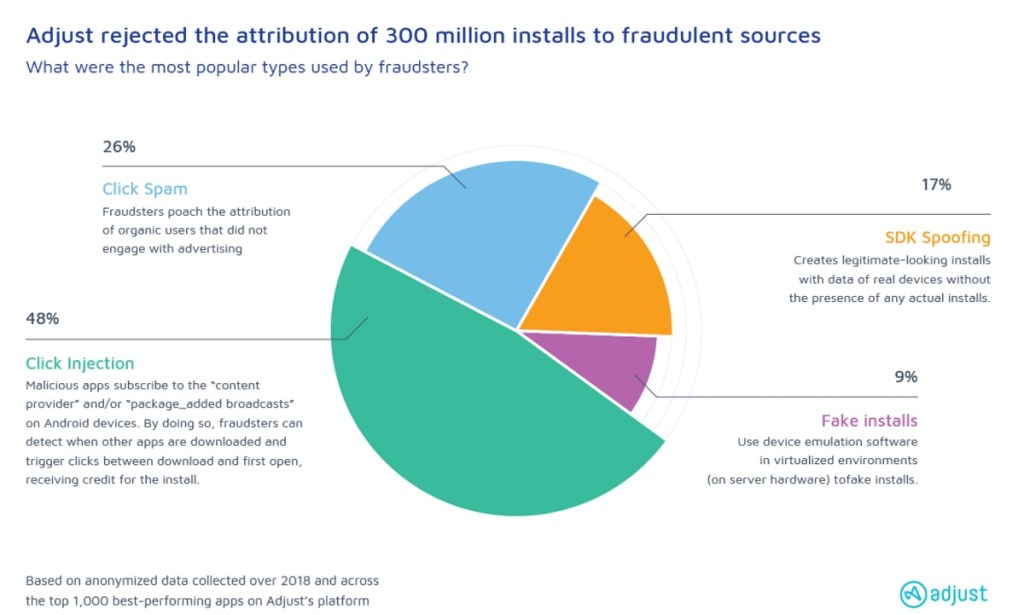 Above: Adjust identified the types of fraud.

The report also showed that fraud remains a serious issue for mobile marketers — with ecommerce, dating, and banking apps the hardest hit. Data from the report showed that Adjust rejected close to 300 million (269,036,991) fraudulent installs in 2018.

Adjust said Click Injection (a popular type of ad fraud) accounted for almost half of these rejected installs with 48%, followed by Click Spam (26%), SDK Spoofing (17%), and Fake Installs (9%).

Dating, Banking, and Shopping apps topped the list for the verticals most affected by ad fraud.

“Ad fraud continues to be a black mark on the mobile industry the world over. While dating, banking, and shopping apps are most affected, that’s not entirely surprising,” said Paul Müller, chief technology officer at Adjust, in a statement. “These apps have among some of the highest CPAs (Cost per Actions). It’s worth bearing in mind that fraudsters don’t discriminate by vertical, they just simply follow where the money is — and the larger the cost, the bigger the motivation for fraudsters to go after the app.”

As a bonus, I have embedded a video of Adjust’s session at GamesBeat Summit 2019. Katie Hutcherson Madding, global product director at Adjust; Yaron Oliker, CEO of Unbotify; and moderator Steve Peterson, CEO of StoryPhorce Entertainment, spoke about distinguishing between bots and humans in app usage.