The pandemic has played havoc with the real-world economy. But the mobile app economy is another matter, as mobile app session times and installs saw dramatic increases in the first quarter compared to a year ago.

The numbers show that the app economy is resilient in the face of COVID-19, according to a report by mobile measurement firm Adjust in Berlin. The data show that many app verticals are seeing increases in sessions and installs in 2020, most notably in the business, food and drink, and gaming app sectors.

With the pandemic forcing the majority of employees to work remotely, it’s no surprise that business apps have seen a huge rise in sessions (up 105% from Q1 2019) and installs (up 70%). Revenue events are also up 75%, as users opt for premium versions to help ease the transition to working from home. 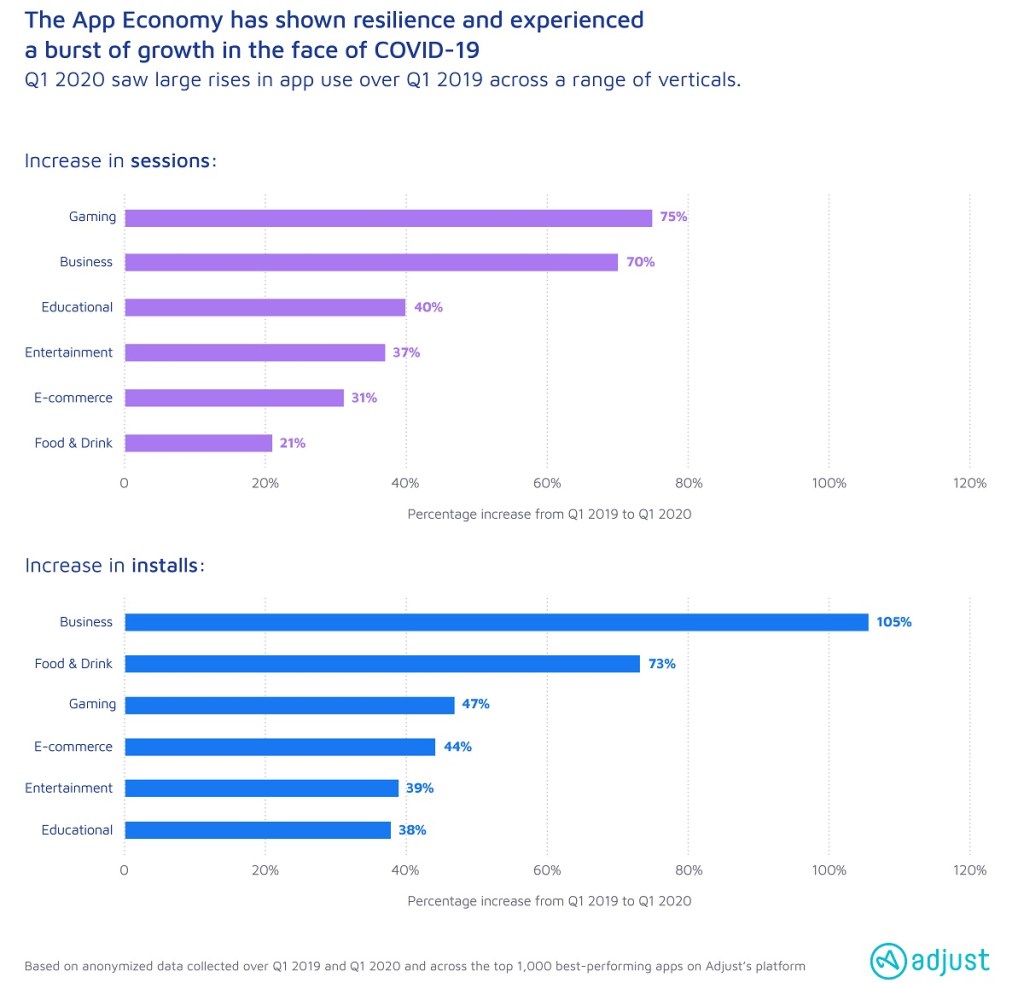 Above: The app economy is going strong despite COVID-19.

As many restaurants were forced to turn to takeout-only, food and drink apps also saw a significant increase in sessions — up 73% on this time last year, while installs increased by 21%.

And, as reported elsewhere, gaming has also seen a large uptick in installs, as those sheltering-in-place seek entertainment. In the last week of March, the vertical saw a 132% increase in the number of installs compared to last year. In total, gaming apps saw a 47% increase in sessions and a 75% increase in installs in Q1 2020 compared to Q1 2019.

Paul Müller, cofounder and chief technology officer at Adjust, said in a statement that beyond the increases in installs and sessions, the report shows little evidence to suggest there has been a fundamental shift in user behavior, after the installation is done. He said users are still taking the same actions in-app, such as averaging a little above two sessions a day, to churning at predictable points in the customer journey.

The report also sheds light on differences between paid and organic installs, noting that app marketing is fast becoming a pay-to-play game — as the market becomes increasingly competitive. The number of installs from paid sources amounted to 30% of total installs in 2019, up from 24% in 2018.

Additionally, the report explores when users typically engage with app verticals throughout the day, offering insights into peak times and the windows of opportunity for reactivation campaigns.

Ecommerce apps are also enjoying a peak of sessions both at lunchtime, between noon and 2 p.m., and again in the evening, with sessions between 7 p.m. and 10 p.m. accounting for a quarter of their daily total. Similarly, Food and drink apps see a spike in use between 5 p.m. and 8 p.m., accounting for 31% of their total daily sessions.

On the other hand, many gaming apps don’t see significant shifts in use throughout the day. Casual game activity increases between 12 p.m. and 4 p.m., but it’s a modest bump of only 15%. Meanwhile, midcore games rise from very early in the morning (5 a.m.) to peak at 1 p.m.