Adobe Flash, a platform for integrating animation and video into web pages, is making the jump to a television near you. Adobe’s newest take on Flash is slated to usher in a new era of enhanced living room gadgets — converting web-enabled TVs, Blu-ray players, and set-top boxes into web video-ready, widget-friendly powerhouses.

To date, Flash has mainly been used to create ‘containers’ (i.e., YouTube’s embeddable video player) for delivering rich internet media to websites. With the rise of the smartphone market, Adobe also rolled out a mobile version of Flash designed for online video viewers on the go. However, today’s announcement will allow developers to use Adobe’s Flash runtime to deliver similar rich-media apps — like dynamically updated online video, audio, and RSS widgets — to a slew of HD-ready living room devices. (See Adobe’s depiction below.) 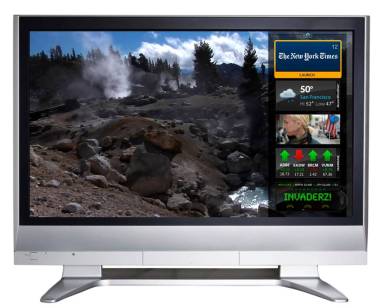 Ideally, widgets created with Flash would let developers seamlessly integrate apps into the user interfaces already built into a device. So, for instance, users of a web-enabled HDTV could hypothetically access a plethora of rich media widgets right from the television’s existing menu system. For users, this could open up a new viewing experience that resembles a hybrid desktop/television interface.

Of course, successfully rolling out a platform of this scale across myriad devices takes a number of partnerships. For the launch, Adobe is announcing an A-list group including cable operators, content providers, and device manufacturers like Intel, Comcast, Disney Interactive, Netflix, Atlantic Records, and the New York Times Company. When we asked Anup Murarka, Adobe’s director of technology strategy, to name a couple devices we could expect to find Flash on in the near future, he predictably shied away. However, he said that hardware manufacturers are planning on holding their announcements until their Flash-enabled product lineups are ready to go.

Muraka also told us that today’s announcement is less of a land grab for Flash and more of a natural progression of the platform. Given the prevalence of Flash-enabled web video (and the coming onslaught of web-enabled televisions), this actually makes a lot of sense. According to a recent report from comScore, roughly 80 percent of online videos worldwide are viewed via Flash. On the smartphone front, comScore says more than a billion mobile devices will have shipped with the Flash runtime embedded by the end of Q1 2009. These stats are especially crucial because the new framework is also backwards-compatible with pre-existing Flash apps.

Will this be enough to fend off Flash competitors like Microsoft’s Silverlight? It certainly appears so. As if Adobe’s stellar numbers weren’t enough, its partnership with Netflix — who currently uses Silverlight for its movie-streaming service — should be a harbinger for further dominance. Ultimately, the proof will be in pudding when Flash starts popping up in living room devices later this year.