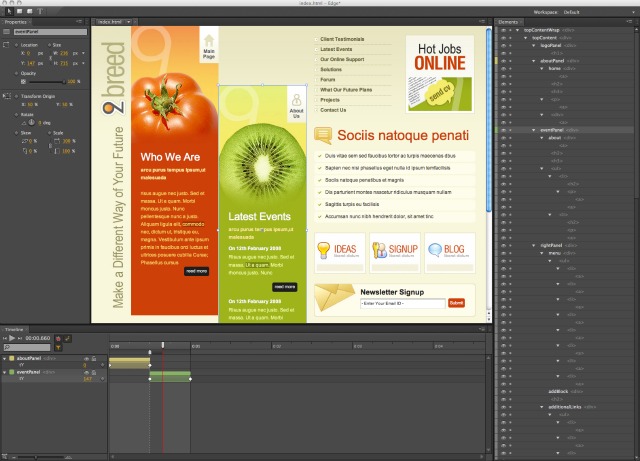 Adobe is doubling down on HTML5 today with the public preview release of Edge, a new design tool for HTML5 web motion and interaction.

The company “sees a huge opportunity to help people be successful with HTML5,” Adobe’s Devin Fernandez told me in an interview last week. HTML5 is emerging as a competitor to Adobe’s dominant Flash technology, but the company clearly doesn’t want to be left out as HTML5 becomes more widely used.

Edge allows developers to easily edit animations and interactive Web page elements based on HTML5, CSS3 and Javascript. Fernandez tells me that the software relies on strict HTML standards, so there won’t be anything additional to muck up your code.

Adobe’s Mark Anders demonstrated to me how Edge could be used to easily create an animated HTML5 ad. While the software doesn’t offer the same robust animation elements as Flash, it’s certainly going to be useful for developers who choose to work with HTML5, as there aren’t any professional-level editing tools dedicated to the standard yet.

“Edge shows that Adobe can remain a premier tools vendor for designers no matter what the runtime,” Al Hilwa, program director of applications development software at IDC told VentureBeat. “The tool chain for creative design is how Adobe makes its money and there is a great need for HTML5 tools right now.”

Edge isn’t meant to replace Adobe’s existing web design tools like Dreamweaver or Flash — instead it’s just another option for developers. Adobe is making the software free during its initial testing period, and it’s encouraging feedback from developers. The company says it will update the software faster than anything it’s released before to keep up with the rapidly changing world of HTML5.