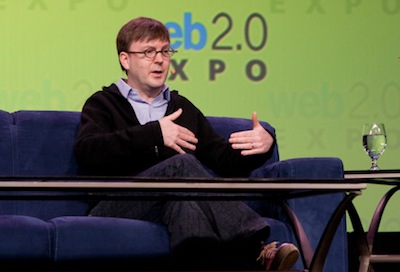 Apple has blocked Adobe’s Flash technology from working on the iPhone, and the debate has included some harsh words from the executives of both companies. But Lynch said much of the discussion looks at things too narrowly.

This isn’t really about competing technologies like Flash and HTML5 (the latest version of the basic format of the Web), he said. Instead, it’s more about openness and choice. Specifically, Web developers should be able to create applications using the formats that they like for the platforms that they like. Apple shouldn’t be making the decision for them. Lynch compared the company’s moves to the railroad companies of the 19th century, where some rival railroads used different gauges of rail, so it was a big hassle to transfer freight cars between different lines and ship goods across the company.

“We need people to compete on the merits of the things they do, not on the gauge of the rails,” Lynch said.

One reason Lynch framed the issue that way is because it’s more flattering to Adobe. When the discussion focuses too much on Flash itself, that opens Adobe to criticism of Flash’s performance issues and the fact that the technology is owned by Adobe, rather than being an open format like HTML.

Lynch also fired back on some of Apple’s technical objections to running Flash apps on the iPhone. There are Flash apps available in the iPhone App Store right now, and they work just fine, he said. Apple’s issue with Flash “is not that it doesn’t work, it’s that it does work.”

Now that Apple has changed its developer agreement to block Flash apps, Lynch said Adobe will stop working on its iPhone export tool, and will instead work on all the other devices that support Flash and Air, Adobe’s technology for cross-platform applications.

“We don’t want want to play technology games while Apple is playing a legal game,” he said. “Boy, there’s a lot of great devices coming out, and you’re going to be blown away when you see them.”

And Adobe isn’t just about its own technologies, he said. It will offer tools to build HTML5 web applications as well.