The growing popularity of large-screen mobile devices is having a big effect on mobile ads. That’s one of the takeaways from the new Adobe Digital Index’s Q4 Digital Advertising Benchmark report, released today.

Bigger smartphones, as well as phablets and tablets, mean that more of the clicks on ads are intentional — and fewer are “fat finger” accidental ones.

Clickthrough rates for mobile devices saw a big boost in the report, 27 percent year-over-year for tablets and 26 percent for smartphones. This, in turn, has driven a 19 percent increase in CTR for Google advertisers in general (Q4 year-over-year).

The much higher CTR also represents a more efficient ad spend, the report noted, since the cost-per-click (CPC) rates are up only 8 percent on Google. In other words, it’s more return for the buck. Yahoo/Bing, the report said, is not so efficiently optimized, as CPC there is up 7 percent year-over-year while CTR growth is zero. 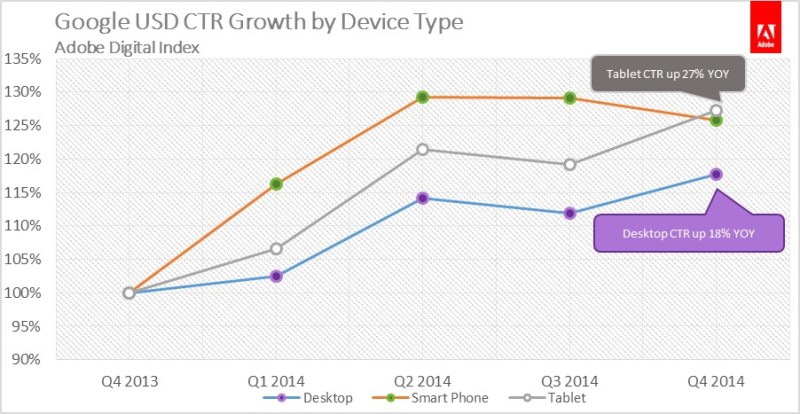 Above: Growth in Clickthrough Rates, by device

“The tablet is a great interface,” director of product marketing Tim Waddell told VentureBeat. “The engagement rate is great and the [sales] conversion is great.” So, he said, it makes sense that the same interaction pattern would apply to the new wave of larger screen mobile devices, like the Samsung Galaxy Note 4.

‘Kind of war going on’

While the Adobe report doesn’t break down ad stats by screen size, principal analyst Tamara Gaffney told us there was “an indication” that the rise in clickthroughs was a result of the growth in larger screens.

And it is enough of an indication for her to predict that “as a result of larger screen smartphones, the value of CPC [cost-per-click] will increase.”

“Based on larger screen phones already in the market, we know that retail conversion and media consumption rates go up as screens get larger,” she said. And, as sales conversions increase, the clicks become more valuable.

Gaffney described as “surprising” the fact that Yahoo/Bing CPC growth rates are about the same as Google’s, even though their CTR growth is flat. It’s “indicative of marketers spreading out their money [through] more tools that allow programmatic buying,” she said. Programmatic buying enables them to quickly maneuver as ad rates change so they can get the best return-on-investment, such as by finding effective places to run their ads.

“There’s a kind of war going on,” she added, where “marketers seem to be figuring out how to optimize their spend” through their automated tools.

Another takeaway: The spend on Google’s “Shopping Ads” ballooned during the just-passed holiday season, nearly eight times that of text ads. Year-over-year, Shopping Ads spend is up 47 percent.

Google’s Shopping Ads — which used to be called Product Listing Ads — are those image-based promotions that appear when you search for a product. The images and their positioning at the top of a results page appear to be making a big difference.

Shopping Ads represent about one-fifth of all retail search engine marketing in the U.S., the report said. Adobe is predicting that they will grow to nearly a third by 2015’s holiday season, and that nonretailers will also begin adopting them as visually based ads take a greater role in Google results.

By contrast, Yahoo/Bing’s Product Ads — released in March of last year — represented less than one percent of U.S. retail clicks.

“Text ads are still the big kahuna of search,” she noted, since they account for two-thirds of U.S. retail clicks. But the question is: for how much longer, given Shopping Ads’ growth and Text Ads’ decline? 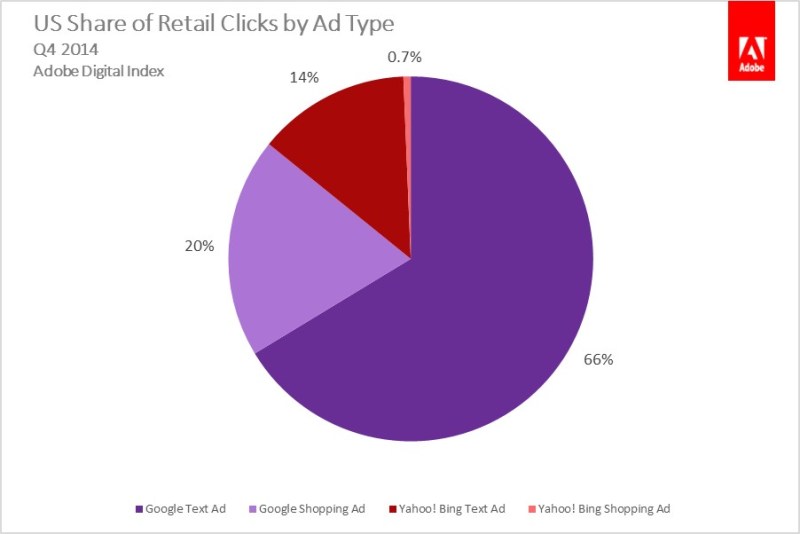 Above: Clicks by ad type

The data also shows that more mobile search is happening on Sundays and more desktop search on Mondays. Which makes sense, since people are out and about on the weekends and back at their desks on Monday.

It also appears that retailers are adjusting to Facebook’s change in its newsfeed algorithm, which has reduced organic brand posts to a trickle. Adobe predicts that Facebook organic impressions will plunge another 40 percent by next year.

“Organic,” Gaffney said, “is toast in Facebook for brands.” She said the fact that “it didn’t take long for brands to adjust [is] indicative of how important Facebook is to their mix.”

“Facebook aggressively makes it more difficult for brands to be successful on its platform without adopting their pay-to-play system of advertising,” Adobe said in its report.