Early fall last year I had the honor of having a one-on-one lunch with a CIO at large organization. I will leave her nameless, but our discussion about technology adoption has stuck with me for months. 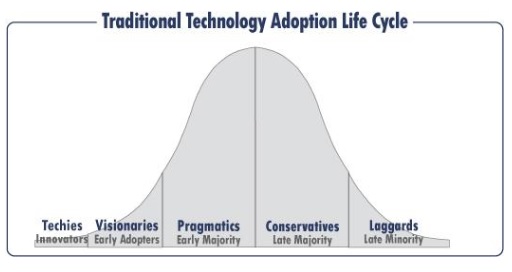 The graph at right shows the generic technology adoption lifecycle that displays the pattern most tools and systems follow in their acceptance by users. The CIO — let’s call her Mary — commented that this cycle plays out with each new technology adoption her organization and leadership introduced. Her premise around the challenges of working with management or any adopting group at her organization was centered the following core observations:

1. There are two groups a CIO will struggle with making happy:

2. The most vocal group can lead you astray.

Mary’s second point was that the most vocal group (particularly in a larger business) is usually comprised of the techies and visionaries who will push for more complex systems to meet their visionary applications that appeal to the narrowest of actual usage.

So I asked, “Where should you focus your time and effort, Mary?” Quickly she responded, “The 80% in the middle — early and late majority. … This is where businesses need to appeal and have their greatest impact on their workforces.” This was a lightbulb moment! Think about it:

This outlook has crystalized for my organization, Kaltura — a provider of video platforms for a variety of industries and businesses. For example, we recently launched a new personal capture tool to layer on top of our platform of services for the higher education market, and as we did our preliminary market study of features/functions, the urge was to go all in from day one. 12 video streams? You got it!  Advanced image/audio/recognition engine that knows when coffee is ready and pours you a cup? Sure, make it happen! But as we started showing early alpha examples to clients, what got them fired up was a return to simplicity for their “middle” set of users, such as easy navigation, no complex installers, video showing up right in their personal repository and following them across their various portals/systems.

They wanted the basics, done really well, so that is what we gave then. Since then, the response to a simple, easy to use (meets majority of use cases applications) tool has been tremendous from both clients and prospects alike.

I’m not advocating that we abandon outlying use cases and users. Those trendsetters and advanced users become the standards of tomorrow. For those of us, CIOs and partnering vendors alike, who are trying to implement improved technologies, the insight from Mary is an important lesson.

So my unsolicited challenge to all CIOs out there is this: When you’re engaging with employee and product technologies, are you focused on the majority or the very loud, cutting edge minority that are likely not representing the masses?

Justin Beck is a VP of Education at Kaltura, an open source video platform.