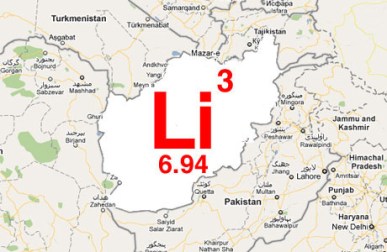 Since reports emerged this weekend that Afghanistan is home to a massive deposit of useful minerals, namely lithium, the green news complex has been buzzing about which superpowers will try to dominate it and how it might be used. After all, lithium has been approaching a potentially costly shortage just as a bevy of electric cars depending on lithium-ion batteries take to the roads.

According to the New York Times, the minerals — worth upwards of $1 trillion — were discovered by a roving band of Pentagon officials and geologists. The group then had to inform Afghanistan’s president, Hamid Karzai, about the lucky strike — which also includes iron, copper, cobalt and gold — and which could turn the country into one of the most important industrial mining hubs in the world. The unnamed player here: China, owner of 97 percent of the rare earth element refining operations in the world.

“China has positioned itself very well as the clean technology minerals leader,” says cleantech analyst Dallas Kachan of Kachan & Co. “The rest of the world is years behind them. The U.S. has no commercial rare earth element refining operations. China effectively has a strangle hold on the rare earth elements needed for cleantech — including those needed to build wind turbines and other things, not just batteries.”

According to Kachan, the global community is just now waking up to this.

This budding face-off with China is the subject of most of the stories covering the Afghanistan mineral find. Not only is China keen on cornering the lithium-ion battery market, it’s also looking to meet demand for green consumer vehicles, now that it’s become the biggest automotive market in the world. Just look at China’s BYD — founded as a battery maker and funded by Warren Buffett — it has rapidly branched into electric vehicles with ambitions to break into the U.S. and European markets too.

But there’s no telling yet if the Afghanistan mineral deposit will yield this much profit for anyone involved. Bolivia was recently discovered to contain an estimated 50 percent of the world’s supply of lithium, but the country has resisted outside investment — meaning no money on all sides.

There are too many factors to take into consideration, and no report has yet put a number on how much lithium or any other substance is actually available. All that’s known is that the deposit is widely dispersed, which Kachan says is pretty common for lithium. Sometimes veins of the element can be thinly spread over hundreds of miles, making it incredibly difficult and costly to extract.

On top of that, lithium is more difficult and time-consuming to mine in some regions than others. In Bolivia, it is frequently mixed in with magnesium, which is very hard and expensive to evaporate and then separate. Lithium is found in higher concentrations in Chile and Argentina, where it has actually become a profitable business. If the lithium doesn’t evaporate easily in normal conditions, it could be cost prohibitive to mine at all, Kachan says. None of this information is available yet on the Afghan deposit.

“This is not a slam dunk for the countries that stand to profit from it,” Kachan says. “It sounds promising for the economy of Afghanistan, but there’s no guarantee that it will have Saudi Arabia-like prosperity. There are too many unknowns. The importance of Bolivia’s reserves was overestimated. It has half the world’s lithium but it doesn’t make economic sense to mine it.”

Assuming the deposit could be more easily mined, it’s hard to imaging Afghanistan choosing not to develop what could become the new backbone of its faltering economy. As many reports have stated, the country lacks any meaningful mining operations or native expertise, so it looks like foreign investment would be vital to the establishment of a successful mining sector. But its relations with the U.S. are strained, at best, these days.

“The market is wide open at this point, but China is best positioned to take advantage of the discovery,” Kachan says. “China understands the power of dominating the building blocks of cleantech, so expect it to be aggressive.”

But even if China does make a deal with Afghanistan to set up lithium mining and refining operations there, that won’t make it the automatic winner in the advanced battery and plug-in vehicle industries, Kachan emphasizes.

“Lithium makes up such a relatively small percentage of lithium-ion batteries,” he says. “So whoever owns the storehouse won’t necessarily win in the electric vehicle marketplace.”

He also points to the development of lithium recycling efforts in countries other than China. In anticipation of the shortage, major U.S. automakers and smaller startups all over the world are starting to invest in technology that could turn lithium into a renewable resource. This could make China’s lead in the rare earth elements game less of an issue, but probably not obsolete.

Amid all this speculation, few media outlets have called attention to how fishy reports of the Afghanistan element deposit sound to begin with. Is it really realistic that a small band of Americans was able to dig up something the native population has been sitting on for years? Kachan says its possible, given lithium’s typically thin dispersal over large areas, but didn’t disregard skepticism.

The U.S. has an array of motives for playing up news of the discovery. Afghanistan’s economy has basically been decimated by the ongoing war there, and the U.S. military hasn’t had any good news come out of that region for a while. In one shot, the mineral deposit seems to be solving the country’s financial woes while positioning America to capitalize on the potential profits. This seems pretty convenient.

On top of that, the Pentagon memo revealing the mineral deposit states that the elements are scattered throughout the country, with concentrations near the Afghanistan-Pakistan border, where conflicts with Taliban insurgents are still frequent. Calling attention to the prospective wealth in this region could draw in new allies for the U.S. China has been traditionally resistant to sharing its burgeoning rare element monopoly, but might it make an exception and help the U.S. in this situation, or will it deal directly with the country’s reportedly corrupt government?