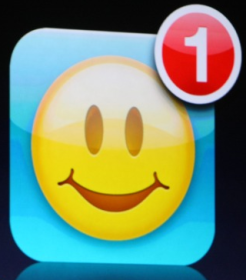 At its iPhone 3.0 event today, Apple gave some details about what is coming in the new version of its software development kit (SDK). There are a ton of changes, but one of the most anticipated is that its Push Notification system is finally ready to go.

If you recall — and we’ll forgive you if you don’t since Apple first announced it so long ago — Push Notification is the system by which Apple allows third-party apps to talk to the iPhone or iPod touch without those apps actually running in the background. Why not let them run in the background? “It’s not good for the customer,” Scott Forstall, Apple’s senior vice president of iPhone software said today. The main problem? Battery life.

While that is disappointing, my experience with the G1 — the first phone running Google’s Android platform (which allows apps to run in the background) — has been that background apps drain the battery very quickly. A lot of people complain that the iPhone battery is already a weak spot of the device. If any application was allowed to run in the background, it would be worse — much worse.

Push Notification gets around this problem by using Apple’s own servers as a hub to ping your device when an app wants to talk to it. That element is what has caused the hold up in Push Notifications release. When Apple announced the service at last year’s WWDC, it said that it would be available by September of last year. That never happened. “You know, we’re a bit late on this,” Forstall joked.

Apple had to completely re-architect the Push Notification system, and it claims that it’s ready to go now. There will be three types of notifications: badge indicators (numbers that appear on iPhone icons), audio alerts and text alerts.

If nothing else, this complete re-architecture and Forstall’s comments mean that we’re not going to see third-party applications that can truly run in the background on the iPhone any time soon. Certainly, as the device’s battery life improves with future versions, I’m sure Apple will look into it, as I still don’t believe that Push Notification will be able to handle everything that people will want to do.