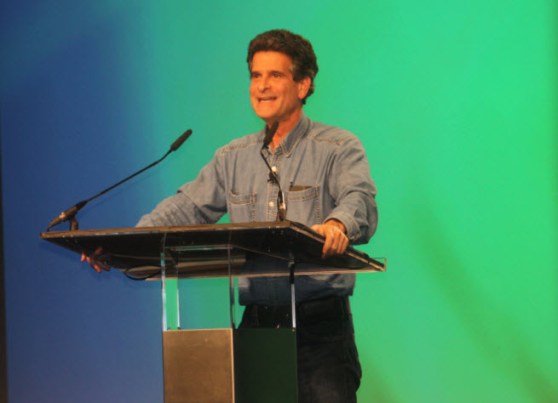 Dean Kamen refers to himself as a “mascot” for technology. The founder of Deka Research and well-known inventor has more than 440 U.S. and foreign patents. He created the insulin pump and the portable dialysis machine, and the Segway scooter. He was inducted into the National Inventors Hall of Fame in 2005 and won the National Medal of Technology in 2000. 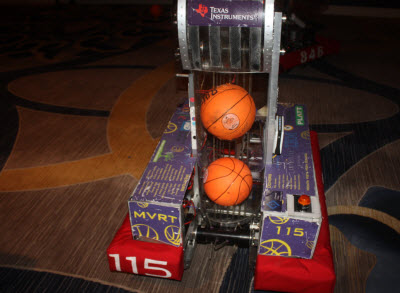 But wherever he goes (like the Semiconductor Industry Association dinner in San Jose, Calif., last night), he always talks about the educational sports foundation he created, For Inspiration and Recognition of Science and Technology (FIRST). The group makes a sport out of getting kids to embrace technology and science. They do so by competing across the country with other kids who build robots, like the basketball-shooting robot (pictured) from Cupertino’s Monta Vista Robotics Team.

In a keynote speech before a thousand chip industry executives, Kamen said he came up with the idea for FIRST out of frustration in 1989. He looked around at American society and was frustrated at how a whole generation of kids were growing up with warped perceptions, shaped by mass media, that made kids obsessed with professional sports athletes and Hollywood stars. And smart kids were branded as socially inept nerds.

“I looked at a culture that seemed to be going astray,” he said. “You can’t find a kid today who can tell you who won the Nobel prize in medicine. We don’t have an education problem. We have a culture problem.”

Kamen liked sports, but as a pastime, not an obsession. America came of age with great inventors like Thomas Edison and the Wright brothers, but, he said, “It didn’t seem like that was the core of the culture anymore.”

Instead of fighting it, Kamen embraced the idea of using competitive sports to get kids to realize that science and engineering could be fun. He shrugged off concerns that it might put too much pressure on kids. He started FIRST, and got the first competition going in 1992.

“Maybe you should stop keeping score in basketball because there is too much pressure,” he said. “how about developing the muscle hanging between your ears? We needed a culture that celebrated this stuff.”

Kamen created a robot-building kit and distributed it to 28 teams. They competed at a gym in a high school in Manchester, New Hampshire. Now, FIRST has reached more than 250,000 young people. Last year’s competition was held in the huge Edward Jones Dome in St. Louis, Mo.

My own daughter competed on a FIRST LEGO League team during elementary school, building LEGO robots that carried out a bunch of tasks over the course of two minutes. The Cupertino team’s robot (pictured above) was able to collect basketballs and shoot them through a hoop.

“Kids build self-confidence and self-respect,” Kamen said. “It was astounding.”

Kamen said that every sitting president since the first George Bush has welcomed the FIRST champions at the White House. The elder Bush showed up at one event and said, “Wow, this is like WWF (the World Wrestling Federation). With smart people.” More than 120,000 volunteers make the FIRST happen, and the FIRST scholarship program hands out more than $16 million in college scholarships.

And now professional sports athletes and Hollywood stars like the Black Eyed Peas are promoting FIRST. Speaking to the chip executives, who are sorely in need of engineers and are bemoaning the state of education in the U.S., he said, “In your own enlightened self-interest, get involved.”