Facebook is backing away from its March site redesign, a source tells me. That’s the redesign that focused users’ homepages on a quickly updating “stream” of status updates — and was trying to take on microblogging service Twitter, as the source put it. A Facebook spokesperson has confirmed that it is “iterating” in this direction, although it adds that nothing has been finalized. 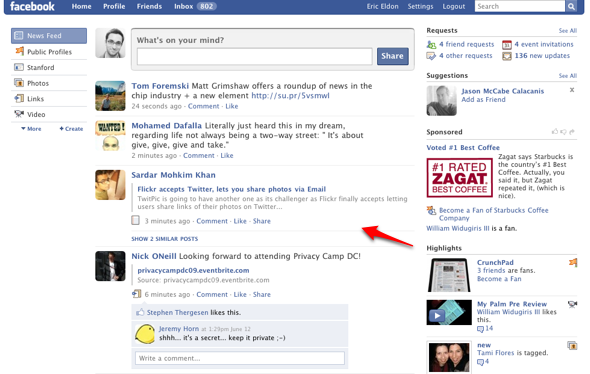 The March redesign took away the “news feed” homepage, and moved photos, events and other information from your friends into a right-hand column called “highlights.” The result, Facebook recognizes, is that people who aren’t on the site all the time have trouble keeping track of everything their friends are up to. Now, information from the “highlights” section will be integrated back into the stream, in some sort of combination of status updates and everything else on the site.

Some portion of Facebook’s 200 million-plus users really hated the move away from the news feed. Millions have protested in comments on Facebook’s official posts on the matter, as well as on third-party polling applications — as well as in articles about the redesign. Some people, including myself, find ourselves getting more valuable information out of services like Facebook when we use them in real-time.

We’ve publicly said [ed. here] that we were going to iterate on the homepage, just like we’re doing all the time across the site. In a large part the change is because we acknowledge that there needs to be a balance between the stream and highlights.It’s been a big point of feedback: They missed news feed in its former structure. We are looking at ways to help users understand not only what’s happening right now but what’s been happening since they last logged in.