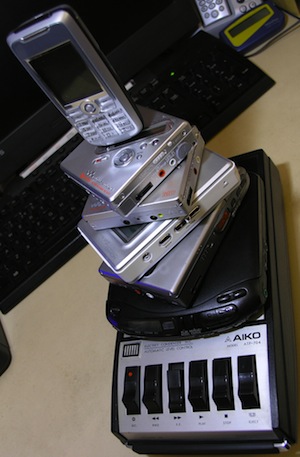 But nearly every other gadget manufacturer is missing the point: It’s not about the specs any more. It’s about the ability of devices to deliver a seamless, integrated, easy-to-use experience that combines plenty of desirable content and useful services, with a minimum of hassle.

Call it “vertical integration” or whatever you want, it’s the strategy employed by successful companies like Apple, Amazon, Nike and Microsoft to make some of their products nearly unbeatable in the market.

Apple’s iPad is not the world’s most successful tablet because of its hardware engineering (though that helps). It’s successful because it’s locked into the iTunes marketplace, giving it a vast, built-in library of music, movies, TV shows, audiobooks and apps. That connection is often restrictive, but it also offers many people more than enough content to choose from, and it’s easy to use.

It’s also why an Apple television could become a serious competitive threat. By turning television channels into apps, it could bypass the cable box (and the cable company), letting viewers interact with Internet-based, streaming content (browsing through shows, for instance) via an app that runs on their iPhone, iPad or computer and delivers the shows to their television.

Similarly, the Kindle Fire will be a serious competitive threat to other e-readers and tablets (if not the iPad), as I’ve written before, because it’s matched with a huge library of e-books and music, plus Amazon’s small but growing library of movies and Android apps.

Nike+ is by far the most successful health and fitness monitoring tool on the market, despite the fact that other devices have more capabilities or offer platforms that are more open and more flexible. Why? Nike+ combines the massive reach of Nike’s shoe business with a simple, easy-to-use online service that lets you track your walks and runs and share data with your friends. It helps that it ties into Apple’s hardware as well.

Microsoft has done a similar trick with its XBox 360, following the model laid down by Sony and Nintendo and making its console successful by tightly integrating it with an online network, a huge array of game titles and accessories (most notably Kinect) that are unparalleled in the market.

You don’t have to be a giant company to pull off this kind of integration, though. Square is a remarkably successful payment-processing company in part because of the easy tie-in between its card-reading hardware (a tiny dongle that’s so cheap the company gives them away by the basketful, for free), its app, and Square’s online services. That integrated system gives Square the ability to build new products, like its point-of-sale device or a consumer wallet product, which build upon the installed base of its existing customers.

It’s the tie-in between hardware, software and services that gave Square its first leg up. It would have been far less successful if the company had concentrated on selling card-reading hardware, or apps, without first figuring out how to link everything together in an easy-to-use way.

Why is vertical integration suddenly so important? For the same reasons that it’s suddenly so easy to start a social network or an app company: There’s lots of wireless infrastructure out there , processing power is abundant and cheap, and cloud services make it easy to deploy server resources flexibly.

In other words, if it’s easy to make a cloud-based social network that customers access through an iOS app, it’s also that much more feasible to integrate cloud services into a specialized piece of hardware.

And for now, at least, consumers seem more taken with specialized gadgets that are simple and easy to use than they are with complex devices that can do anything but are hard to figure out.

So when you’re handicapping new hardware products, ask yourself what I ask: How well does it integrate with software and online services?

For example, Barnes & Noble’s Nook Tablet is a promising-looking device, only $50 more than the Kindle Fire and even more powerful under the hood than the iPad 2. Too bad Barnes & Noble doesn’t have the same kind of media library that its competitors do. Books, yes, but the company comes up short in other content and in apps (and you won’t even be able to install standard apps on the Nook Tablet).

The Jawbone Up is another interesting example. It tracks your every movement throughout the day, using the same simple accelerometer technology that’s built into every other fitness-tracking device. It comes with an iOS app, and it may well be very well-built, easy to use and good-looking. But its success or failure will depend on the extent to which it’s able to integrate with a larger array of Internet-based services, so you can add apps to it, track new kinds of data, or integrate that data into other health and fitness tracking apps.

So this holiday season, and when I go to the Consumer Electronics Show in January to check out the gadgets that are coming up in 2012, I’ll be looking for devices that do more than just wow me with the specs. You should too.

Photo: Not an effective form of vertical integration for gadgets. Photo by Dave Campbell/Flickr.