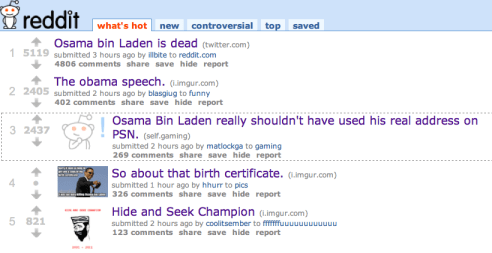 The story about Al Qaeda leader Osama Bin Laden’s takedown has skyrocketed to the top of news aggregation sites like Condé Nast’s Reddit — showing that even tech geeks are rushing behind what might be one of the highest trafficked stories on the web of all time.

Reports poured in indicating that Bin Laden was killed in a CIA operation in Pakistan, a report U.S. President Barack Obama later confirmed in a live broadcast. The news skyrocketed to the top of news aggregation sites Reddit and Digg, which are traditionally frequented by tech-savvy individuals. The main story on the front page of Reddit has already received more than 34,000 votes — which has blown past the last record-engaged story that picked up around 30,000 votes over the course of its entire lifetime.

The news has only been fresh for a few hours and it has already spawned a number of offshoot stories — such as comics and jokes. One top link: “Osama should not have registered his real name on the Playstation Network,” a jab at the online gaming network that was taken down last week and led to hackers stealing massive amounts of private information.

The news traffic related to the killing of Osama bin Laden has caused a bigger traffic spike than the royal wedding, according to Keynote Systems, a mobile and cloud computing web monitoring service.  Mobile sites are likely to suffer under the load, especially as people tune into web video, according to the company. The company also said CNN’s mobile site went down due to extreme load after the news broke.

Even startup incubator Y Combinator’s Hacker News, another online news aggregator, didn’t escape the Internet’s frenzy. A link to the New York Times’ report on Bin Laden’s alleged death was the second top story on the site, which typically links to sites that have some kind of programming or entrepreneurial advice.