San Jose, California-based cybersecurity startup Vectra AI today announced it has raised $130 million in a funding round that values the company at $1.2 billion. Vectra says the investment will fuel the company’s growth through expansion into new markets and countries.

According to Markets and Markets, the security orchestration, automation, and response (SOAR) segment is expected to reach $1.68 billion in value this year, driven by a rise in security breaches and incidents and the rapid deployment and development of cloud-based solutions. Data breaches exposed 4.1 billion records in the first half of 2019, Risk Based Security found. This may be why 68% of business leaders in a recent Accenture survey said they feel their cybersecurity risks are increasing.

Vectra was founded in 2012 by Hitesh Sheth, and the company provides AI-powered network detection and response services. Vectra’s platform sends security-enriched metadata to data lakes and security information and event management (SIEM) systems while storing and investigating threats in this enriched data.

The aforementioned metadata is wide-ranging but includes patterns, precursors, account scores, saved searches, host scores, and campaigns. It’s scraped from sensors and processing engines deployed across cloud environments, where the sensors record metrics from traffic and ingest logs and other external signals. 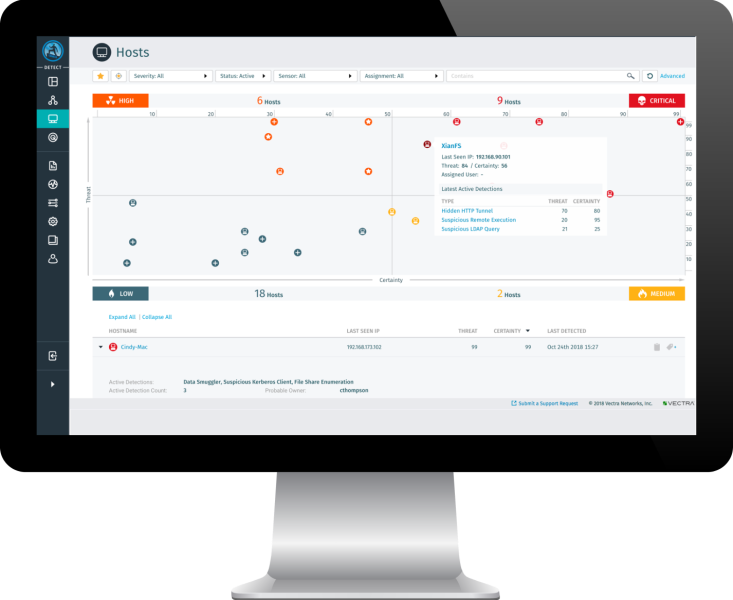 Above: The Vectra AI dashboard.

“For us, it all starts with collecting the right data because attack behaviors always vary. We’re continuously creating machine learning models for any type of new or current threat scenario,” Sheth told VentureBeat via email. “AI-based security defenses are the right tool for modern network defenders, not because current threats will become some dominant force, but because they are transformative in their own right.”

A growing number of cloud users are suffering malicious account takeovers, according to a survey conducted by Vectra. Nearly 80% of respondents claimed to have “good” or “very good visibility” into attacks that bypass perimeter defenses like firewalls. Yet there was a contrast between opinions of management-level respondents and practitioners, with managers exhibiting greater confidence in their organizations’ defensive abilities.

“The pandemic has caused a further shift toward the cloud, even for organizations that were previously cloud adverse. Companies needed to prioritize the health and safety of their employees, which in many cases meant a shift to remote work,” Sheth said. “However, the only way to keep teams connected and productive was to further adopt cloud applications that enable collaboration from anywhere. For security teams, this means finding new solutions to protect assets and users because traditional network security doesn’t translate to securing a dispersed workforce that has adopted cloud technologies … Vectra can automate threat detection and investigation, provide visibility, and audit remote endpoint security posture to make sure users and company assets are secure.”

Vectra, which has 375 employees and claims a 100% compound annual growth rate in 2020, counts Texas A&M University and Tribune Media Group among its customer base. In February, the company closed the strongest quarter in its history.

“To me, this funding round confirms today’s cybersecurity capital markets are rewarding the most effective and innovative technology — not just the best pitch,” Sheth said. “Contrary to flashy Hollywood headlines about some Skynet-like AI hacker coming to get you, actual human attackers are far more clever than any contemporary offensive AI systems. This is in part because AI systems conform to a series of ‘rules,’ and as every human hacker knows, rules are made to be broken.”

Sheth added “The most likely scenario is that some AI techniques merely make it into the toolkit of human adversaries, such as incorporating natural language AI into large-scale phishing attacks. We shouldn’t downplay the impact of a good phishing campaign, but if this is the sum total of what your C-suite is preparing for, you have your work cut out [for you]. Decisions about which AI cybersecurity solution to commit to should be driven based on outcome-based evaluations. This means selecting functional, rather than purely ornamental, solutions.”