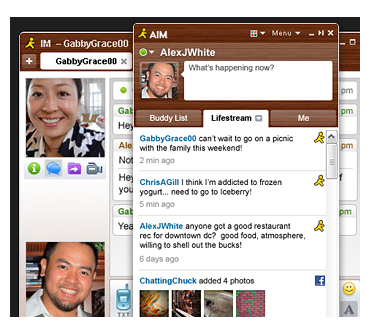 To reclaim some of its old glory and keep up with social networking startups, AOL is opening up its AIM instant messaging service with the latest versions of its chat software and mobile applications today.

The AIM team demonstrated the new apps today at the TechCrunch50 conference in San Francisco. The iPhone app should be live in the App Store today, and the other chat products should be available. on Sept. 22.

The company is honing in on the mobile market, building apps that meant to rival SMS text messaging technology on a smartphone. It’s also pivoting away being a chat-only client by integrating two-way communication with Facebook and Twitter — meaning you can update your status from AIM or even use AOL to read your feeds of tweets and friend updates.

“My goal is to make AIM and ICQ better known for their mobile apps than their desktop ones,” said David Liu, AOL’s senior vice president of AOL People Networks. “We believe that’s where the ultimate endgame is going to be.”

Although the app can’t run in the background on the iPhone, Liu said push notification could help AIM mimic the feel of text messaging.

AIM has to fight back after both Facebook chat, Google Talk, Meebo and Adium wrestled users away, bringing its base to around 21 million active monthly users. At the same time, other types of communication have flourished on the web. Twitter’s explosive growth has demonstrated that AIM can no longer just think about live, one-to-one communication. It has to incorporate public, one-to-many forms as well.

“Our blueprint for the lifestream is the most aggressive and open one out there — we’re thinking about how can we make this more inclusive and deeper,” Liu said.

AIM has been playing around with different ways to integrate with other websites and show a lifestream of your friends’ updates for a while now.