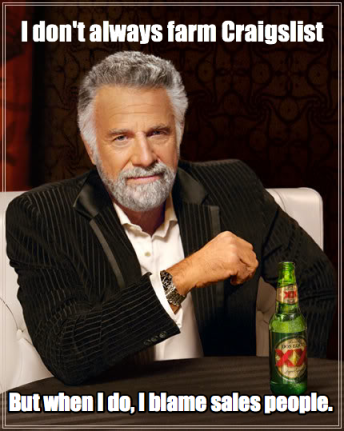 Social bed and breakfast startup Airbnb has enjoyed a fair amount of buzzworthy press recently with the announcement of Ashton Kutcher as the company’s new strategic adviser and a $100 million mega-round of investment speculated to close soon.

But the company has admitted that, before gaining the kind of attention that has many calling it the next hot startup, it hired contractors who used unsavory tactics to get people posting property listings on Craigslist to create a listing on Airbnb as well, according to Tnooz.

Entrepreneur Dave Gooden wrote a blog post about those tactics, which he determined to be automated spam accounts used to harvest email addresses (otherwise known as “farming”), according to his own personal tests.

Airbnb blames the actions on a “rogue” sales team it contracted to acquire listings through person-to-person sales. After investigating the tactics used by the sales team, it found no evidence of an automated or data harvesting process and concluded that “their efforts were largely ineffective.” The company also stated that it doesn’t condone the practice of farming Craigslist.

Some believe Airbnb is more guilty than its admitting, such as Business Insider’s Pascal-Emmanuel Gobry, who points out that plenty of fledgling companies resort to shady tactics to get their startup off the ground. But in Airbnb’s defense, I can’t imagine Craigslist would have an abundance of properties that would provide travelers a “unique experience” similar to a bed and breakfast — meaning there wouldn’t be much benefit from the company’s perspective. It’s much more plausible that an outside contractor did it to satisfy the promotional goals it was hired to accomplish.

Regardless of whether Airbnb is more responsible for gaming Craigslist than it’s leading on, it probably won’t have any impact on the mega-round of funding or its status as the next hot tech startup.