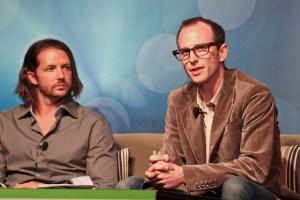 Today Airbnb is one of Silicon Valley’s hottest startups, but it has definitely failed its way to glory.

That made yesterday’s Failcon — a San Francisco event where entrepreneurs revel in their most humiliating defeats — an ideal venue for co-founder Joe Gebbia to talk about his company’s five-year journey to legitimacy, and some serious revenue generation.

The key to success is finding your way out of “the trough of sorrow,” where an entrepreneur’s true mettle is tested, said Gebbia.

After the initial buzz and excitement of a company’s launch wears off, a long and grueling trek to adoption often follows. (The so-called trough of sorrow.) Gebbia and his co-founder Brian Chesky went through a period of 18 months where they were completely broke, owed $15,000 on their credit cards and were struggling to get potential investors to understand their vision.

“Our whole premise was a fail,” said Gebbia, showing slides of early versions of the company’s site design and logo. The initial concept of providing a housing solution focused around conferences was not sustainable, and required a rethink, Gebbia said.

Airbnb pairs people who have extra space in their home or apartment with those travelers who are willing to pay to stay with strangers.

While the idea is not for everyone, the opportunity to save a significant sum off the price of a hotel has propelled to company  to massive user adoption. Gebbia said Airbnb expects to book 3 million stays on its platform this year. In July the company raised $112 million in new financing in a round led by Andreesen Horowitz, DST and General Catalyst, at a valuation in excess of $1.3 billion.

During the 18-month trough of sorrow the founders couldn’t raise a dime, but they were able to attract significant attention on more than one occasion. During the 2008 Democratic National Convention, the company emerged as one of the success stories of the conference, because they helped find lodging for many of the nearly 100,000 travelers to Denver, a city with only 20,000 hotel rooms. Attention flooded in, traffic spiked temporarily, but user growth did not follow.

Airbnb has become so successful, that the name itself has become synonymous with the concept of collaborative consumption — sharing the things you own and aren’t using with strangers. While showing pictures of the apartment he shared with Chesky, where the first Airbnb users slept, Gebbia said he was literally laughed out of meetings with potential investors.

Through it all, though, Gebbia and his partners never lost site of the initial vision, which gave them passion and dedication that fueled their eventual success.

“Because we’ve experienced it, we could believe in it,” said Gebbia.