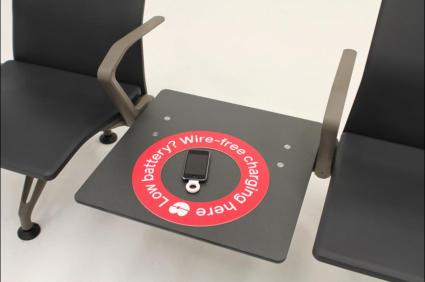 ﻿Finnish startup PowerKiss builds wireless chargers into furniture. The company just announced a partnership with airport seating supplier Zoeftig that should result in mobile users being able to charge their phones while they wait to board a plane or train. Zoeftig already makes some seating with mains power built into the armrest.

PowerKiss makes a small receiver (the Ring), which plugs into mobile phones, and an electrical transmitter, which is built into a piece of furniture like a table (the Heart). You place your device on the table and it charges wirelessly. Currently, the Ring is only available for phones, but PowerKiss plans to add new receivers for laptops.

The PowerKiss charging technology was developed in-house and is based on resonating field induction that creates an electromagnetic field around the Heart transmitter. The Ring receiver adapts the current produced by the field to the requirements of the mobile device.

Induction of this kind has a very short range, so the transmitter and receiver must be close together. Other methods for transmitting power wirelessly, like converting radio waves to DC power, have a longer range but are more suitable for low-power devices like wireless sensors.

A Californian company called PowerBeam uses optical transmitters and receivers that convert electricity into optical power to transmit. The receiver turns the optical power back into electricity. Power can therefore be “beamed” to any device within the line of sight.

PowerKiss is targeting public places like airports, hotels, restaurants and conferences. The company already has a partnership with travel food specialists SSP to roll out wireless charging in the restaurants of 30 airports. Combine this with Amsterdam Schiphol airport’s new robot-powered baggage system and it looks like European airports are going high-tech.

PowerKiss was founded in 2008, is located in Espoo Finland (where phone maker Nokia also has its headquarters), and has 15 employees. It has been funded to date by angel investors and a government-backed VC fund.