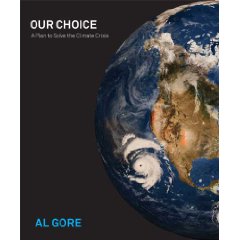 Al Gore’s new book “Our Choice: A Plan to Solve the Climate Crisis” burst onto the scene yesterday, drawing glowing reviews, talking-head ire, and more than a few questions about his credibility, motivation and future as the self-appointed leader of an emerging environmental intelligentsia.

Instead of offering yet another review of his new book, here is a roundup of the choice words of other critics, to give you a sense of the range of opinions, and also the hype the book has sparked.

Newsweek may have offered the best, pithy analysis yet:

Our Choice is Al Gore at his best and his worst. It is authoritative, exhaustive, reasoned, erudite, and logical, a textbooklike march through solar and wind power, geothermal energy, biofuels, carbon sequestration, nuclear energy, the potential of forests to soak up carbon dioxide, energy efficiency, and the regulatory tangle that impedes the development of a super-efficient, continent-wide system of transmission lines.

Basically, the book exhibits all the reasons we loved and hated Gore as a presidential candidate back in 2000. He is incredibly brilliant but sometimes a know-it-all, detailed and holistic in his analysis but in a way that escapes a mass audience, the review argues. It also points to his continued political presence, and his desire to remain a high-profile puller of strings.

The New York Times’ coverage of the book highlighted the number of pages Gore devotes to telling people why they have been dragging their heels on the climate change issue. He acknowledges how hard it is to change ingrained habits, but says that the structure of our brain — mostly the profrontal cortex — allows us to see and act based on long-term consequences. It also lauded the book for pitching some unexpected solutions to the climate crisis, including the empowerment and education of women and a mass movement toward organic eating.

While many of the positive reviews, including those on the Huffington Post and The Energy Collective, praised Gore’s breadth of material and the intelligence of his recommendations, none of them were quite so keen on its market appeal as his friend and Kleiner Perkins’ partner John Doerr, who yesterday on VentureBeat called the book “wonderfully accessible and pragmatic.”

Both Doerr and Gore have taken some flak for the glowing post. Today, Private Equity Hub asked in response, “What else would you expect Doerr to say?” It points to a reader review on the book’s Amazon page reading, “Al Gore has reinvented himself as a marketer of hot air…”

This is the tack taken by several other publications, including the Los Angeles Times, which questioned whether the publication of “Our Choice,” will officially make Gore the first “carbon billionaire.” Pointing out that Gore happens to make a pretty penny from his investments and personal support for green companies, the article leaves whether he is profiting off environmental catastrophe or just “putting his money where his mouth is” up for debate.

(By the way, Al Gore will be speaking at VentureBeat’s upcoming GreenBeat conference, focused on the Smart Grid, on Nov. 18 and 19 in San Mateo. Get your tickets to see him speak live at GreenBeat2009.com.)

In the U.K., the Guardian delved even further into the possible conflict of interest between Gore’s business entanglements and his public advocacy for green, bringing up past concerns:

The accusation that Gore is trapped in a conflict of interest has been raised periodically over the past few years. It is a barb popular among climate change sceptics and rightwing bloggers, as well as Republican politicians. Marsha Blackburn, a congressional representative from Gore’s home state of Tennessee, tackled him over the issue in April during a subcommittee debate in Congress on the Obama administration’s proposed cap-in-trade system for curbing emissions.

To hear Gore give his take on the book, check out an excellent interview by Elizabeth Kolbert in this week’s New Yorker, in which he talks about his role at the U.N.’s December climate talks in Copenhagen, the recent corporate defections from the U.S. Chamber of Commerce over carbon trading, and how important it is for China to wake up to global environmental realities. The transcript gives you a sense of just how expansive his knowledge is on all these topics.

For those who want to see him as he talks, you can watch him discuss the book with Katie Couric in the video below. Couric calls him the “godfather of green” and the “king of conservation.”

Also be sure to tune in tonight to see Gore talk about “Our Choice” on the Jon Stewart Daily Show on Comedy Central.
http://www.eyeblast.tv/public/eyeblast.swf?v=Gd6U6U8zuz