The partnership brings together Remedy, a seasoned maker of high-end console games that has ventured into mobile previously with Death Rally, and Flaregames, the mobile game publisher started by Gameforge founder Klaas Kersting. Even as Remedy works on high-end console games like Quantum Break for Microsoft, it is also trying to strike gold with mobile games in the new digital era.

Agents of Storm is a 3D action-strategy game where you lead a team of agents and save the world. You build a base, expand your fleet, attack enemy-held islands, and watch 3D battles unfold. The combat is cinematic, and you can cooperate with friends, send them reinforcements, and compete on leaderboards and tournaments.

Remedy, based in Espoo, Finland, is best known for high-quality console games like Max Payne, Alan Wake, and the upcoming Quantum Break, which will be both an Xbox One console game and a television show. It focuses on combining storytelling and action. But it’s had some success on mobile, too. Death Rally game had more than 16 million downloads on iOS and Android, and it hit No. 1 in 84 countries. Agents of Storm is Remedy’s first free-to-play game.

“This was the fastest deal ever: Matias and I met over a beer in a London pub, talked shop, and agreed the terms right there,” said Kersting in a statement. “We both love and understand games and that makes for great common ground. Also, I have played Remedy’s games since Death Rally in 1996 and love their work. Agents of Storm shows great potential, we’re glad to work with Remedy on its global launch this fall.”

Remedy CEO Matias Myllyrinne added, “Buying Klaas a beer was £3 well spent. Turns out that Flaregames is the perfect partner to help us excel with our newest iOS venture, Agents of Storm. For us, first and foremost, a good partnership is about mutual respect and understanding. Flaregames brings so much more to the table with a seasoned team of professionals and a track record of scaling mobile games.”

In an email to GamesBeat, Kersting said, “When we first announced our publishing initiative, we clearly stated that we wanted only to work with the best developers worldwide. Remedy is the fourth team we’ve signed, after Subatomic, Superweapon, and Fuzzycube — all great teams, working on games in the strategy/RPG field. You can see what we’re hunting for: veteran teams, with proven expertise, pragmatic leadership and great company culture. Can-do-teams, so to speak. And Agents of Storm is a great game with lots of potential. We believe we have a certain hit on our hands.

“We know our way around mobile games, but we cannot add value to everything. If you have an adventure game, to be sold for $2.99 in the store for instance, we cannot help you much. But if you have an RPG or strategy game operating under the free-to-play model, we can leverage all our marketing experience, all our design expertise, everything that Flaregames has learned in the last years. Agents of Storm is a beautiful, cleverly designed “action strategy“ much like Royal Revolt, it fits our portfolio very well.” 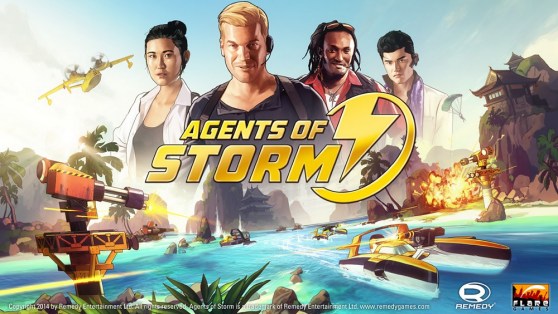 Above: Agents of Storm

Myllyrinne said in an email, “This game has been in the making for a while, almost two years to date actually. Honestly, trying to balance our culture of quality and attention to detail with a ‘minimum viable product’ mobile culture has had it’s challenges. It’s been a learning process but I think we have found our way now.

“It’s awesomely powerful to get real world information about how often people play your game and how long and how often they come back. For us a large part of the learning has been areas that Remedy is not known for, like backend servers, analytics and such. We have been building all that for Agents of Storm but also for the future. I hope gamers will see the love of the craft that shines through in Agents of Storm.”

Myllyrinne said the company has been working on improving the game by reacting to data. It has done updates every few weeks.

As for mobile gaming, Myllyrinne said, “We’ve been constantly pushing what we can do on mobile in terms of content. It feels like a golden age is upon us. The new devices are powerful and allow for much richer graphics and gameplay than one could only have imagined, Agents of Storm opens the door and takes a step or two in that direction.”

And as for doing the deal with Flaregames, Myllyrinne said, “It comes down to a few key factors. Flaregames and Remedy are stronger together, as a business we grow the pie. Secondly, it comes down to complementary strengths. The crew at Flaregames is a dream team for mobile publishing. They have the tools, technology and know how to push games as a service further than we could on our own. For Agents of Storm having someone who shares our hunger and is not the incumbent is the right fit. We are both small dedicated companies who can punch above our weight.”