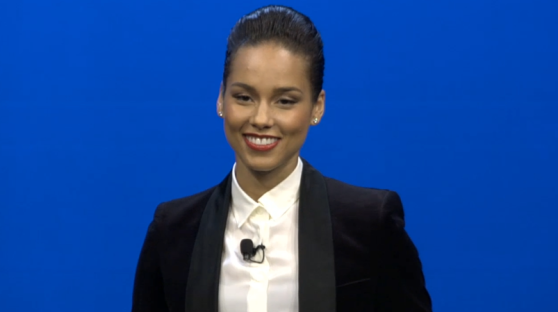 BlackBerry has been full of surprises today, and the latest one is a doozy.

The company has named singer/songwriter Alicia Keys as its global creative director, a new position for the company. By taking the job, Keys will become the creative face for BlackBerry 10.

In one project, dubbed “Keep Moving,” Keys is working with creatives like director Robert Rodriguez and author Neil Gaiman, who will show how BlackBerry 10 fits into their workflows.

“We wanted someone at the top of her field, well-respected and immensely creative, someone who incorporates tech and creativity into her day-to-day work,” BlackBerry CEO Thorsten Heins said.

“I wanted to do something where I could grow professionally and personally,” Keys said.

Keys didn’t waste any time tweeting about the news.

With her new gig, Keys is filling a similar role to that of pop star will.i.am, who joined Intel as its director of creative innovation in 2011.

Like Intel’s hire, BlackBerry’s move is meant to add a level of pop relevancy to what the company is working on. Simply put, Keys is trying to help the BlackBerry become cool again.