This fall, Lyft announced that it had formed a partnership with Shell in the U.S. to not only help drivers save money at the pump, but to show that it cares about its workers. The company promised then that this program would be available by the end of the year. Lyft has kept its word: Starting today, drivers can fill up at any of the 12,500 Shell stations around the country and save a little every time.

“We know that fuel is a major expense for drivers,” said David Rust, Lyft’s head of operations strategy. “[Starting today], all drivers nationally can log into their Lyft accounts and link to their Fuel Rewards accounts.” Drivers nationwide can save $0.25 per gallon in Fuel Rewards savings for their first fill-up. Subsequent fill-ups will save them $0.03 per gallon.

This program was initially rolled out to drivers in Chicago, San Francisco, and Boston, markets Rust explained were the three largest for the company, and also fairly represented the Midwest, West Coast, and East Coast, respectively. In these cities, Lyft has enacted a policy that for every 10 trips a drivers makes, they’ll start to see additional savings at the pump, until it tops off at $3.00 per gallon.

Rewards points accrued must be used within two months of the current month or else they expire, but there’s no limit on how much you can save — this is something that’s stipulated in Shell’s program.

Lyft is also leveraging its Shell partnership to reach out to potential new drivers. Rust said that the company will be putting up signage at stations in Seattle, Miami, and 15 other cities across the U.S., with eligible drivers able to earn up to $200 in fuel savings. 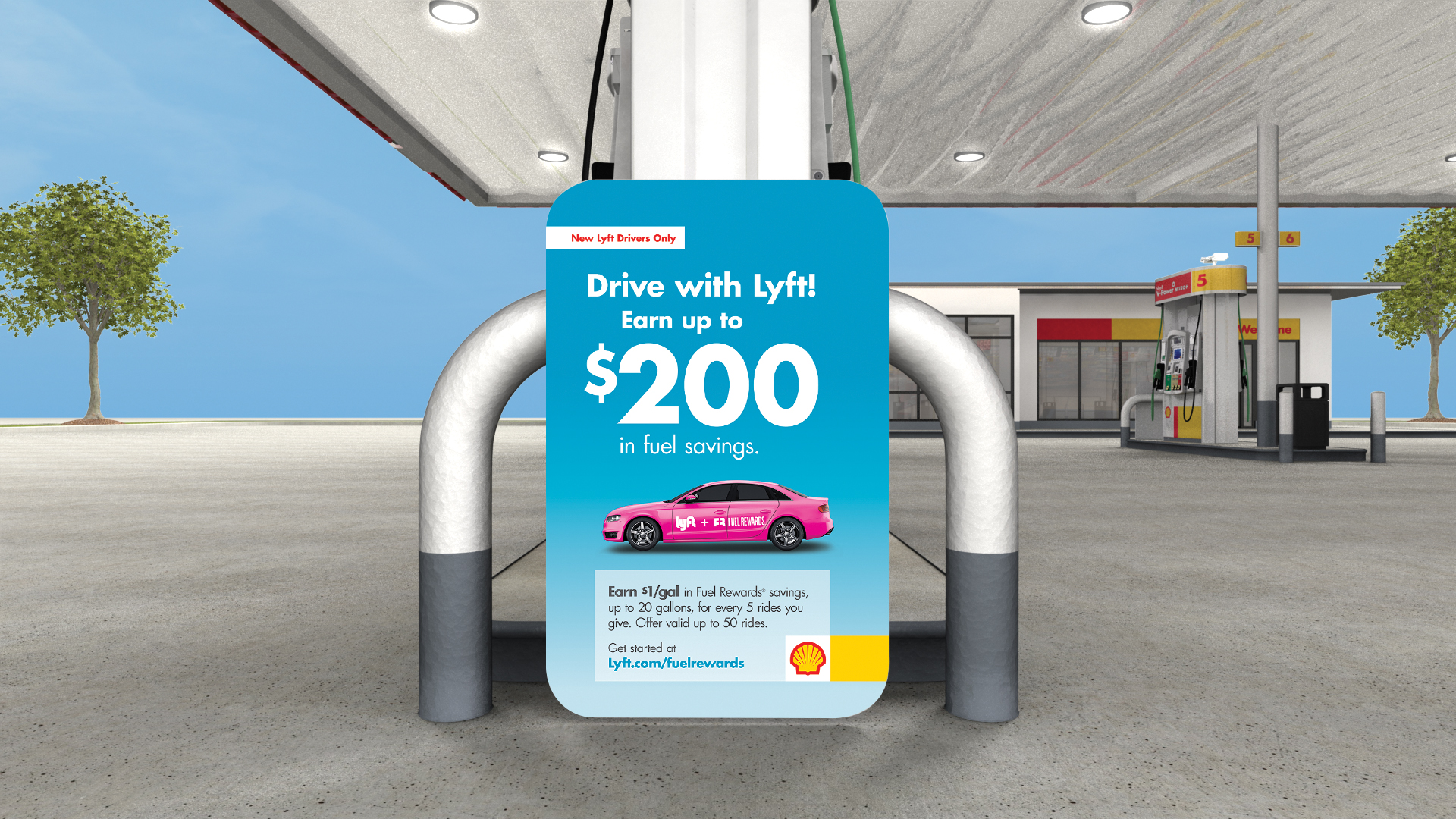 Above: Photo of a Lyft advertisement displayed at Shell gas stations.

Besides the Shell partnership, Lyft also made mention of a deal with Hertz and unveiled a way for drivers to get paid faster. Today, the company is touting the success of these initiatives.

One of the ways the company is making the onboarding process easier for drivers is by giving them access to a rental car, if they don’t have a suitable vehicle themselves. Lyft’s deal with Hertz is supposed to give people the flexibility to drive when it’s most convenient for them without dealing with the restrictions of car ownership. “A portion of users are using [one of our cars] because their car is in the shop, or they don’t have a car, or they own one but it may be too old to use on Lyft,” Rust explained.

In the two months since the launch of this pilot program, the company said that “thousands of rides” have been provided, helping drivers earn more than $150,000 through its service. Although the Hertz deal is only available in Las Vegas and Denver, Lyft plans to expand it to other cities in 2016.

Powered through Stripe, Lyft’s newest tool lets drivers get their earnings whenever they want. Since the beginning of December, Express Pay, as it’s known, has been available throughout the U.S., and 30 percent of drivers have used it at least once, with more than $11 million in earnings paid out instantly.

Rust views the 30 percent adoption rate as a success: “Normally with any feature rollout, seeing 30 percent within a very short time frame is pretty incredible.”

What Lyft wants to impart to its community of drivers is the idea that people come first with the company and that this is what separates it from Uber, its largest competitor. Lyft views community as the ultimate stakeholder as it battles to stay alive in the highly competitive ride-sharing space.

Today’s announcement follows reports that Lyft has plans to raise up to $1 billion in new funds.