More than 89,000 Resident Evil 7 Biohazard players have played the game on the PlayStation VR, according to stats that game publisher Capcom collected since its January 24 launch. It’s a milestone in that it is really the first triple-A game to fully embrace a VR mode. VR needs games like this if it is to fulfill its promise of hitting a $25 billion market by 2021, according to tech adviser Digi-Capital.

A total of 9.47 percent of all of the players — 943,447 — have tried the game out in virtual reality. The Japanese company announced last week that it had shipped more than 2.5 million units of the game to retailers. The 943,447 figure includes those who have enabled the in-game data transmission.

The overall numbers include players on the PlayStation 4, Xbox One, and PC. But the PS4 is the only VR platform for the game, so it appears a large percentage of those players are trying the VR option.

The game launched on January 24, and Capcom announced its shipment numbers a couple of days later. Some investors saw that as a bad sign, as the sales rate isn’t as high as previous Resident Evil games.

My favorite stats on the page include distance traveled within the game: 18.9 million kilometers, 33.9 million enemy kills, 23.8 million head shots, 231.6 million doors opened, 30.6 million doors closed, and 1.8 million times that the villain Jack has been hit with a car.

Here’s our videos of Resident Evil 7 Biohazard gameplay, and check out this take on horror from Jason Wilson, GamesBeat managing editor. 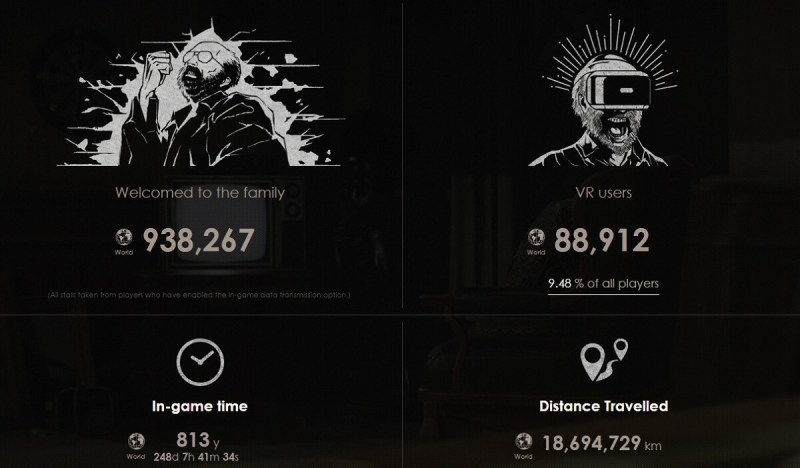 Above: Bandai Namco has running stats on VR usage of Resident Evil 7 Biohazard.