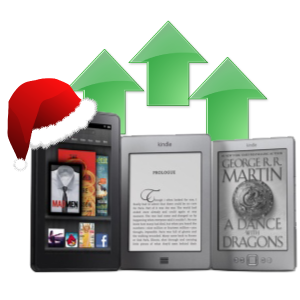 Online retail giant Amazon sold over 4 million Kindle devices this month — about a million per week — to help make it the most successful holiday shopping season ever, the company announced today.

Amazon launched a new line of Kindle products in November, which included the Kindle, the Kindle Touch and a seven-inch Kindle Fire tablet computer. Amazon is making little or no money on the devices, but it’s using them as a means to sell more products through its online retail store. The three products also topped Amazon’s bestseller list for the month and were among the most popular items sold in the UK, France, Spain and Italy as well as the main Amazon.com store.

The company also noted that its e-book sales rose significantly between Black Friday and Christmas Day — up 175 percent compared to the same period in 2010. Also, the first and fourth best-selling Kindle books released in 2011 were published independently by the books’ authors through Kindle Direct Publishing.

Third-party merchants on Amazon also experienced strong sales this holiday season. On average, the number of merchants who exceeded $5,000 during the holiday season was up 44 percent compared to last year.

Here are some other interesting details from Amazon’s 2011 holiday sales release: