SAN FRANCISCO — Amazon’s interest in video games is growing, as we can see from a talk from a company executive at the Casual Connect game conference today.

The whole universe of games is expanding on multiple dimensions thanks to factors like the growing ubiquity of mobile operating systems. Some of the predictions aren’t new, but it is interesting that they’re coming from someone at Amazon, the world’s biggest online retailer and a new entrant in games — an industry that makes billions of dollars each year.

“The next jump in gaming is happening right now,” said Ethan Evans, the vice president of the Amazon Appstore. “Games can already migrate easily across multiple screens and devices. It’s time to start thinking about it.”

Evans’ examples of gaming going wide show that Amazon has been thinking about how to take games that are successful on a few platforms and make them much more universal.

He foresees gaming moving into wearable devices like watches or into locations like cars. To emphasize games that are pushing the boundaries, he brought up Sev Zero, a first-person shooter on the new Amazon Fire TV set-top box. A more traditional gamer can play with a controller on the TV, but a casual player with a Fire tablet can play alongside, feeding resources to the hardcore player. That kind of companion gaming is something new.

Another example of an innovation that could push gaming outward is voice recognition (which, oddly enough, is another feature of the Fire TV). You could take the voice search for movies and use it in games instead, he said.

Evans also said the new Amazon Fire phone, which debuts later this week, has a dynamic 3D-viewing feature. If you view it from the side, you get a different perspective of what’s on the screen.

An upcoming Fire game, To-Fu Fury, takes advantage of this feature. Gamers can use it to peer around corners in a game and see a wider view of the obstacles ahead of you.

“It’s a great game with a new mechanic, and it is an example of doors that are opening to new developers,” Evans said.

Advances like virtual reality and augmented reality are further set to change games, he said.

“I think the next truly breakthrough game won’t just ship on a single platform,” Evans said.

One reason is that Amazon is creating cloud services that make multiplayer gaming easier and easier. Cloud games can easily be adapted for different platforms, and they can save games so that you can start playing on one device and finish on another. Evans showed a demo of Amazon Appstream, which can stream sophisticated 3D graphics into a device with a screen that wouldn’t otherwise be able to handle them.

“I look forward to playing cloud-streamed Diablo III on my oven door,” said Danielle Deibler, the emcee for the session. 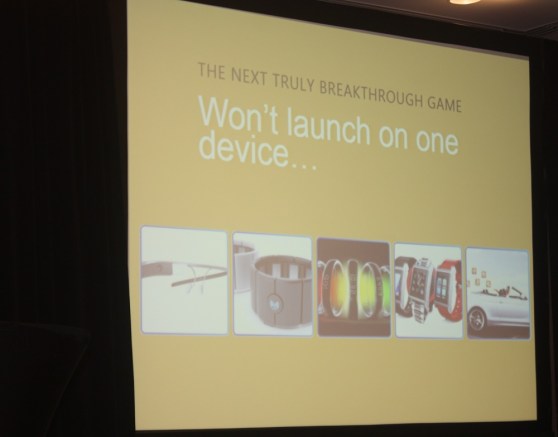 Above: Amazon’s vision of gaming