Amazon closed its $13.7 billion purchase of Whole Foods Market today, kicking off a new chapter not only for these two players but for the entire retail industry.

The companies, which outlined their plans in a joint statement last week, are wasting no time making changes that will affect their customers. Starting today, Whole Foods will offer lower prices on a range of produce, meat, and other staples, and Amazon will start upgrading the stores’ point-of-sales systems to offer its Prime members special savings and in-store benefits.

Whole Foods’ private-label groceries will later be available for delivery through Amazon Fresh, Prime Now, and other Amazon programs. Meanwhile, Amazon Lockers will be available in some Whole Foods stores for customers picking up or returning Amazon.com orders. About 90 percent of Prime subscribers live within 10 miles of one of Whole Foods’ 460 stores.

But the potential integration of the two companies could eventually go much further. The space dedicated to Amazon Lockers in Whole Foods stores could expand to include Amazon bookstores that showcase books and allow shoppers to play with Amazon gadgets, like the Echo. The stores could even become outposts when Amazon decides to broaden its Amazon Go grab-and-go technology.

Amazon could also use a Whole Foods customer’s shopping history to enable Alexa to prompt them to buy certain goods, essentially creating a smarter version of the Amazon Dash button to foster more loyalty to Whole Foods. It could also facilitate both deliveries and fast pickups of ready-made meals, as well as offering the kinds of meal kits pioneered by Blue Apron.

In time, these moves could have ramifications beyond the companies and their customers, starting with direct competitors in the grocery-retail sector. The combination of Whole Foods stores and Amazon’s online grocery operations will become the fifth largest U.S. grocery retailer today. Cowen & Co. expects it to become the third largest by 2021.

Share prices of grocery chains tumbled when Amazon announced the Whole Foods acquisition in June. While some had subsequently recovered, most were down again after Whole Foods shareholders approved the deal and the FTC allowed it to proceed. Walmart, Target, Costco, Kroger, and SuperValue fell between 2 percent and 8 percent Thursday, with most rising slightly on Friday.

Analysts were expecting the price cuts, although some noted that they are coming sooner than expected. A lot will depend on how deep the price discounts are. In a research note, Ed Yruma of KeyBanc noted that Whole Foods has been experimenting with lower prices for some time without improving comp-store sales.

Amazon “may have clearly fired the opening salvo in a pricing battle as it plans to lower prices on a number of grocery staples, including bananas, salmon, eggs, ground beef, and others,” Yruma wrote. “These are also all likely private-label products, which we believe gives Amazon significant pricing flexibility.”

Once managers and investors at these grocery chains feel enough pressure from a combined Amazon/Whole Foods behemoth, a wave of consolidation might sweep the sector. Ecommerce companies like Blue Apron and Instacart could become targets, while some speculate that retailers with a brick-and-mortar presence could be in play as well.

Economists sometimes credit Amazon and other ecommerce companies focused on low prices with contributing to lower inflation over the past decade or so. Food-price inflation has outpaced overall U.S. inflation as tracked by the Consumer Price Index, rising 23.2 percent against the 17.6 percent rise in the CPI. 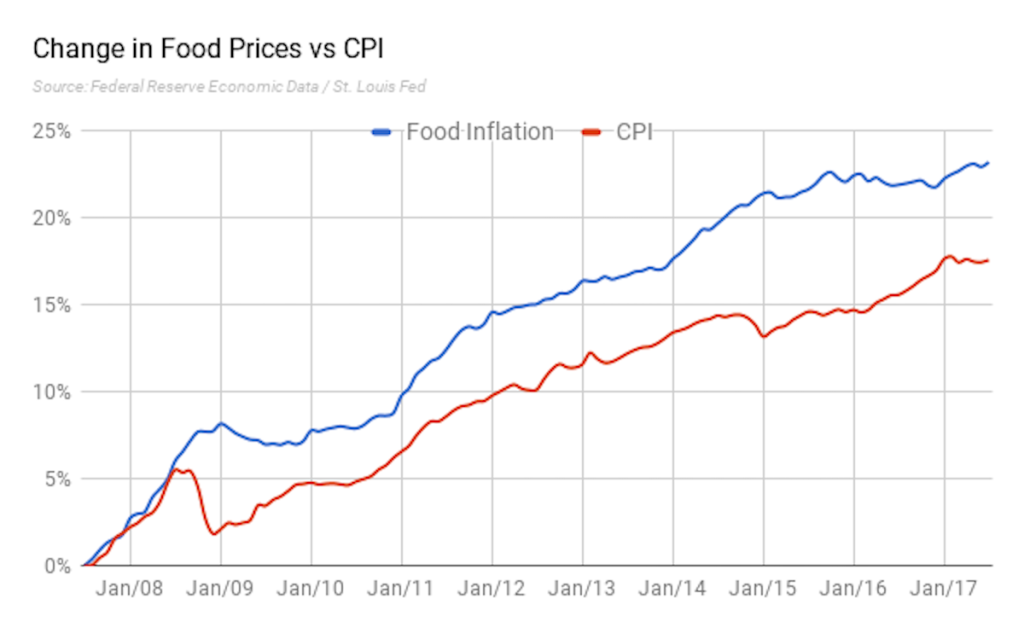 Above: Food prices have risen faster than the overall inflation rate.

At least one Federal Reserve official has indicated that Amazon’s purchase of Whole Foods could further weigh on overall inflation. “For me, it just seems like technology keeps moving, it’s disruptive, and it’s showing up in places where — probably nobody thought too much three years ago about Amazon merging with Whole Foods,” Federal Reserve Bank of Chicago President Charles Evans said shortly after Amazon announced the acquisition.

Finally, the combination of Amazon and Whole Foods will, at least for a while, make Amazon’s financial health even less opaque than it already is. Amazon is known for withholding metrics that could show how well its operations are doing, and Wall Street will be looking for evidence that Amazon is delivering on its vow to improve Whole Foods’ margins over time.

As Amazon invests in technology and reconfigures staff to make Whole Foods more efficient, operating margins could be pushed down initially. But such reorganization would likely cause them to expand in the longer term, assuming Whole Foods is able to draw in more customers with its lower prices. Amazon has not indicated whether it will break out Whole Foods operations in its financial statements or fold them into its current retail operations.