Amazon stock is up down $10 in after-hours trading today as the company reported first quarter sales that grew 22 percent to $16.07 billion — and income that decreased 37 percent to $82 million. 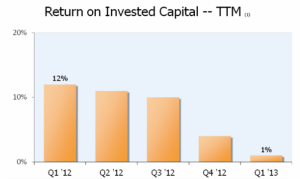 It’s like the opposite of Winston Churchill’s Battle of Britain quote: Never were so many products sold for so much money by such a huge company for so little profit.

For years, Wall Street has been giving this company a pass for never-ending promises for the future — essentially, startup style economics and pricing — and it still is, 16 years after Amazon was founded. While sales grew to $16 billion, free cash flow decreased 77 percent to just $177 million. Part of the reason for that, of course, is Amazon spending $1.4 billion on corporate office space and property in Seattle. The quarter’s income of $82 million compares to the year-ago quarter’s $130 million — already not a huge amount of profit for sales in the mid-teen billions.

But there is a considerable amount of truth that Amazon is still very much in land-grab mode. And the company’s earnings press release highlighted that aspect.

In fact, a full 12 of the 15 highlights Amazon chose to feature in its earnings release are related to digital content, cloud services, and Amazon’s vehicle for delivering that content and services, the Android-based Kindle Fire. And Amazon CEO Jeff Bezos’ first quote in the release is about content — television content, no less:

“Amazon Studios is working on a new way to green light TV shows. The pilots are out in the open where everyone can have a say,” Jeff Bezos, founder and CEO of Amazon.com. “I have my personal picks and so do members of the Amazon Studios team, but the exciting thing about our approach is that our opinions don’t matter. Our customers will determine what goes into full-season production. We hope Amazon Originals can become yet another way for us to create value for Prime members.”

Guidance for the future is not much better, with Amazon CFO Tom Szkutak saying that the company estimates income for the coming quarter at between $0 and $350 million. Which doesn’t really appear to be much guidance at all — a very Szkutakian quality, apparently.

Wall Street, at least seems to be buying it.

For all its vaunted reality-distortion-field capabilities, Apple’s got nothing on this company.