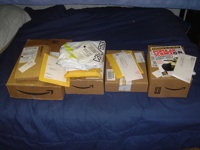 To get more specific, Amazon’s net income increased 9 percent to $225 million, or 52 cents per share, beating analysts’ predictions of 39 cents by more than 25 percent. There were already some early indications that Amazon had a strong holiday season, most notably the company’s announcement that it set a single-day record for orders on Dec. 15. However, I wonder if Amazon was seeing more sales of cheaper items; judging from the earnings data, the company’s bottom line wasn’t hurt too badly.

The company’s results are in stark contrast with e-commerce giant eBay, whose marketplaces dragged fourth quarter revenue down 16 percent year-over-year, despite gains from PayPal and Skype.

Shopping on Amazon is growing domestically and abroad — international sales increased 19 percent to $3.07 billion, and would have grown 31 percent if not for unfavorable foreign exchange rates. North American sales grew 18 percent to $3.63.

Amazon didn’t release any specific data about its Web Services, which provide online storage and computing infrastructure. During the earnings conference call, Chief Financial Officer Thomas Szkutak did say that growing business interest in cloud computing due to economic pressure is a bit of “silver lining in the macro environment.”

As of 2:30pm Pacific Time, Amazon’s stock was up more than 12 percent in after-hours trading.