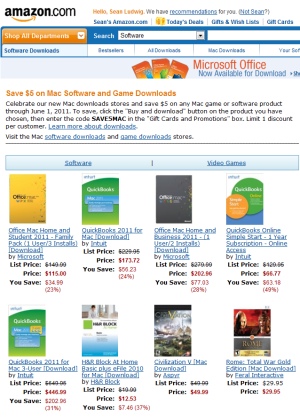 Amazon has fired a shot at Apple with the opening of a download store focused on Mac applications and games. It will act as a direct competitor to the Apple’s Mac App Store, and offers a few big-name titles Apple does not.

The new Mac Software Downloads section on Amazon has about 250 applications and games for Macs that you can install without the need of a disk. Pricing doesn’t appear to be discounted. For example, Microsoft Office for Mac 2011 Home and Student 2011 retails for $115 in the store, versus $117 normally. Dragon Age 2, a popular RPG, actually costs more as a download, retailing for $60 when it could be purchased in a box for $42.

There’s no clear pricing difference from the Mac App Store. For example, the game Borderlands runs for $50 in both stores.

Software that Amazon offers that Apple doesn’t includes Microsoft Office for Mac 2011, Adobe Photoshop Elements 9, Civilization V, and Dragon Age 2. The software is also easier to obtain because it can be downloaded directly from a web browser instead of downloaded through another application.

When a customer purchases a Mac game or app from Amazon, he or she will be allowed to re-download that title as many times as he or she wants. However, each publisher can place restrictions on how many installs the software will allow and how many times a licence can be used.

The biggest drawback to downloading from Amazon is the process of updating software. Apple’s Mac App Store notifies the user of software updates while Amazon says it’s up to the manufacturers. Users who download from Amazon will need to manually check for updates and sometimes may need to check a manufacturer’s website for update details.