Amazon has announced two unlimited storage plans for its consumer cloud-based storage service, Amazon Cloud Drive, which sees a massive price reduction for its giant hard-drive in the sky.

The plans focus on two specific scenarios. For those who have loads of photos, there is the Unlimited Photos plan that costs $11.99 per year. Then there’s the Unlimited Everything plan that, well, does what its name suggests, and costs $59.99 per year. There’s also a free three-month trial available to see how much “unlimited” space you actually need and for what. At any rate, with a monthly cost of $5, it’s almost worthwhile paying for the service irrespective of how much cloud-based storage you actually need.

Before today, Amazon Cloud Storage offered 5GB of storage for free, with a tiered pricing structure thereafter. This ran from 20GB for $10/year all the way up to 1TB/year for $500. So not only does this news today effectively scythe its top-tier offering by 10-fold, but it ups the top-level storage from 1,000GB to unlimited.

For those who were on the free 5GB plan before, it’s not clear whether Amazon will allow users to remain on that plan, or will be upgraded to the $11.99 tier. But the company does say “Existing Cloud Drive customers can change their plans now by simply logging into their Cloud Drive accounts,” which definitely suggests old plans are being made obsolete, though no timescale is given for this.

As part of the Unlimited Photo plan, it’s worth noting that users also get 5GB of additional space to store non-image files, including videos. This is already the case for Amazon’s “Prime” subscribers, and those who own an Amazon Fire device.

This is a huge move from Amazon, and it’s an aggressive play for what is an increasingly competitive market.

For comparison in the consumer realm, Dropbox charges $10 for 1TB/month, with 2GB available for free; Google charges $9.99/month for 1TB and up to $299.99 for 30TB, though it does offer a generous 15GB completely gratis; Apple charges $19.99/month for 1TB, with 5GB available for free; and Microsoft charges $6.99/month for 1TB, with 15GB for free too. However, Microsoft also offers a pretty good deal of its own if you know where to look — for $7/month you can subscribe to Office 365, and part of that package includes unlimited cloud storage on OneDrive. 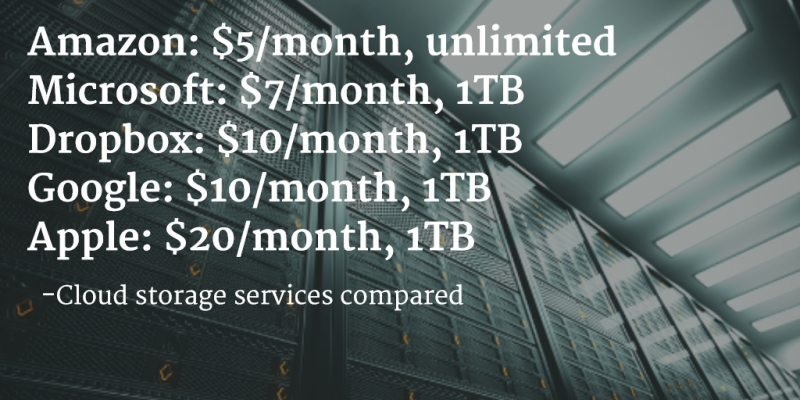 While the Amazon move is undoubtedly brilliant value for money, it’s really just for those who store a lot of stuff in the cloud. The free 15GB that’s available through the likes of Google and Microsoft is actually plenty if it’s just photos and other non-media files that are being stored. However, for those with large movie files, games, and so on — this is where “unlimited” really starts to shine, and $5/month is a really ridiculous price point.

Other companies have dabbled with “unlimited” as part of their core consumer offerings in the past. Bitcasa was one such company; however, it pulled the plug on its main selling point last year citing “lack of demand.” It said at the time:

While our Infinite offering was one of our early value propositions, we have since found that only a small percentage of people use it (only 0.5 percent of our accounts require more than 1TB, and less than 0.1 percent require more than 10TB).

So while Amazon clearly has the capacity to offer a gargantuan amount of storage to the public, it likely knows that most people don’t have storage needs beyond maybe 1TB or 2TB, with many falling well below even that. That said, at the price it’s asking, it may well face a large influx of new customers (its intention, no doubt) that have needs far in excess of 2TB.

Among all this hullabaloo of the “Unlimited Everything” news, it’s actually pretty easy to glaze over the other news — Amazon now offers unlimited photo storage PLUS 5GB of any files, for $1/month. If the race to the bottom wasn’t already on, it certainly is now.