Amazon has given a facelift to its iOS app, adding a new ad-free radio station feature called Prime Stations. The feature lets user skip through songs they don’t like as many times as they wish, Amazon points out. 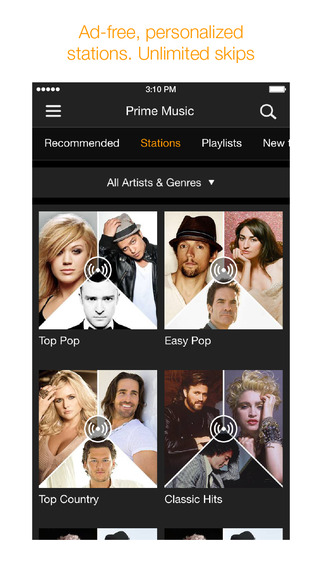 The app features an updated suggestion engine that helps users form their own playlists from Prime songs, albums, and playlists. The service delivers playlists by genre, artist, or via Top 50 lists programmed by “music experts.”

The app looks different, too. The new design, Amazon says, will make it easier for users to browse music available through Prime, and music in their own libraries.

Prime members get ad-free access to more than a million songs, Amazon says.

In addition to the Prime Music service, the free Amazon Music app lets users stream their own music libraries from the cloud, or play music locally on their iPhone or iPad.