Amazon said today it plans to increase its European workforce by more than 30 percent this year as the company seeks to highlight its positive economic impact amid several ongoing EU investigations.

“We continue to invest heavily across Europe in fulfillment, customer service, cloud technology, research and development, machine learning, advanced logistics, and much more,” said Xavier Garambois, vice president of Amazon EU Retail in a statement. “With these investments comes an ever-increasing number of new job opportunities.”

The company said it will be filling positions ranging from seasoned engineers to entry-level jobs. The company has 100 offices, fulfillment centers, and Amazon Web Services data centers in Europe. Amazon noted that “many of the new positions” would be in new fulfillment centers slated to open in France, Germany, Italy, Poland, Spain, and the UK sometime this year.

The jobs are the result of the company’s growing market influence in Europe. But the decision to highlight them lets the company remind regulators in Europe, where job growth and economies remain weak, that putting any clamps on the company could imperil that growth.

Currently, the global giant has found itself in the crosshairs of European Commission regulators over issues like taxes, ecommerce competition, and ebook distribution deals. And, in general, there is a fear across Europe that U.S. tech companies wield too much economic control over the continent’s digital sphere.

It’s also clear that Amazon is on a monster-size hiring binge. Last month, the company announced it would increase its U.S. headcount by 55 percent over the next 18 months to 280,000 employees. 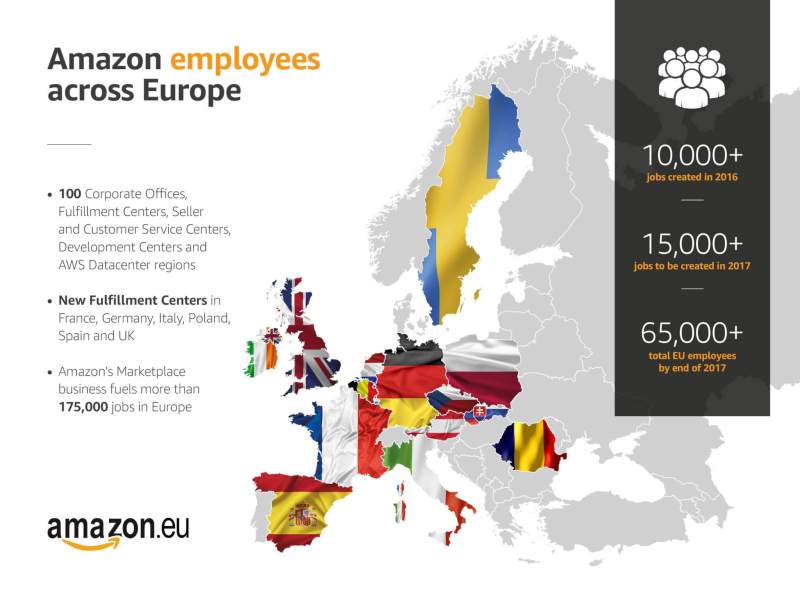