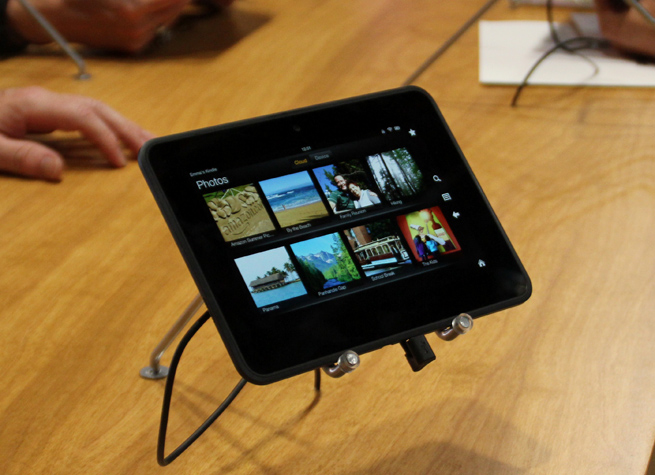 Amazon’s shares are up 11 percent in after-hours trading immediately after the e-commerce giant released its fourth-quarter earnings for 2012.

Shares went as high as $289, bouncing up from $261 before the release. For the quarter, revenue was up substantially to $21.27 billion, a 22 percent increase from the fourth quarter of 2011, but revenue decreased 45 percent to $97 million.

Amazon CEO Jeff Bezos largely credited the strong earnings increase to ebooks, which he said is now a multi-billion dollar category for Amazon — and growing at 70 percent annually. Physical books, in contrast, are slowing. While still growing, Bezos said the growth rate is down to 5 percent, which Bezos said is the lowest growth rate in Amazon’s 17 years of existence.

And one which seems likely to reverse into a decline in 2013, given the growth of ebooks and Amazon’s tablet sales.

Amazon said that its tablets have held the top four spots on the retailer’s sales charts ever since they’ve launched, and that its flagship device, the Kindle Fire HD, is the most popular item in the store. While the reality is that there’s a lot a retailer can do to influence what is most popular and what sells well — and Amazon certain has done that, positioning the Kindle Fire HD front and center on its home page even today — the reality is that the Kindle family, with price points from $119 to $299, is a pretty solid entry-level tablet device. 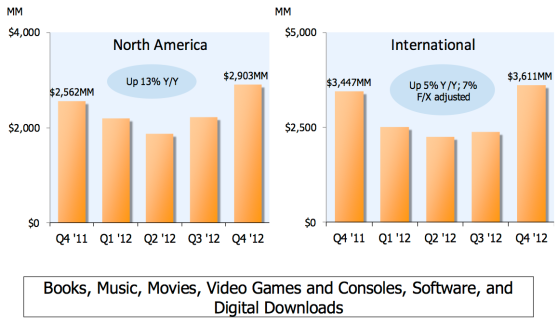 Above: Digital sales at Amazon

However, the company still refuses to release actual sales data on the Android-based tablets — although third-party data suggests Kindle market share is growing fast and total device sales were likely between 10 and 12 million as of the end of 2012.

Digital media seems to be the future at Amazon, and the company reported increases in the amount of content available as Prime Instant Video now has 36,000 titles for viewers to choose from, and 23 million movies, TV shows, apps, books, and more in Amazon’s overall catalog. Amazon recently released a new mobile web store for digital music specifically for iPod and iPhone, clearly competing with digital music incumbent Apple.

Those popular Kindles have helped 23 authors who publish on Kindle to sales exceeding 250,000 in 2012 alone, and 500 books published on Amazon’s Kindle Direct Publishing platform have reached the top 100 Kindle books bestseller list.