The global smart speaker market is on the upswing, according to Canalys, which today released shipment estimates for the most recent fiscal quarter. The firm reports the segment grew 44% to reach 28.6 million units in Q3 2019, coinciding with substantial growth in the smart display category. 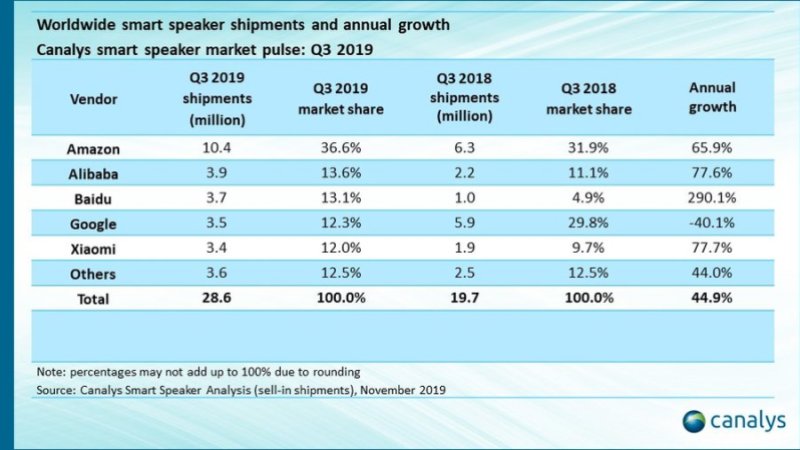 Above: Smart speaker shipments for Q3 2019 by vendor.

Canalys senior analyst Jason Low attributed Amazon’s strong showing to its recently introduced Echo Upgrade Program, which lets users trade in old Echo or non-Echo Bluetooth speakers for newer models at a discounted price. He added that Alibaba’s Tmall Genie devices likely performed well partly because of Alibaba’s collaborations with brands like Starbucks, Budweiser, Abbott, Oreo, and others, which set them apart from products from Baidu and Xiaomi.

“Low-priced devices are vital growth drivers for smart displays and heated competition ahead of the Q4 shopping season is expected,” added Low in a statement. “It is crucial, especially for Chinese vendors, to avoid falling victim to the sunk-cost fallacy, in which they have to stop money-burning to achieve shipment goals, but instead focus on their overall business objectives and to generate revenue soon.” 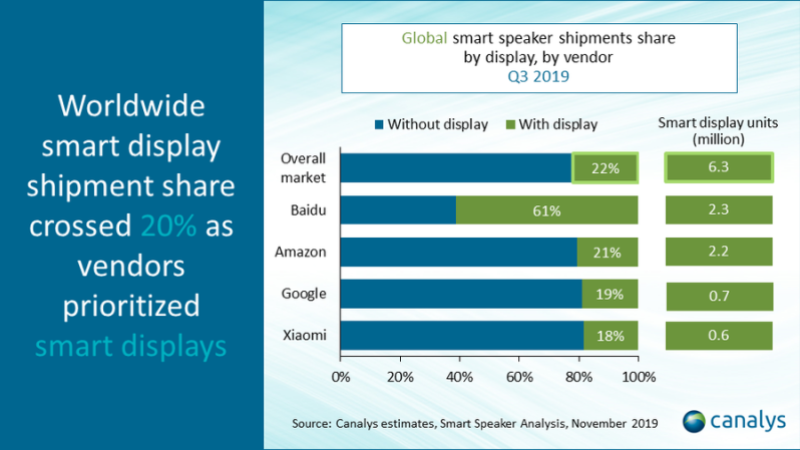 In April, Canalys predicted that the global smart speaker market would top 200 million units by the end of this year. Assuming that comes to pass, it’d roughly double the circa-2018 market’s 114 million units. Specifically, the firm expects the U.S. will retain its installed base lead but that China, South Korea, and Japan will see 166% growth (from about 20 million units to 59.9 million units), 132% growth, and 131% growth, respectively. Elsewhere, it’s projecting Canada’s smart speaker market will grow 80%, followed by Germany’s installed base with 49% growth and the U.K.’s with 47%.