Amazon today disclosed in its quarterly earnings that its subsidiary — Amazon Web Services (AWS) –the largest public cloud currently available for hosting websites and applications, brought in $2.08 billion in revenue for the third quarter of 2015, which ended on Sept. 30.

The cloud came up with $521 million in operating income for the quarter, up from $98 million in the third quarter of 2014. AWS’ operating expenses in the quarter were $1.56 billion.

AWS faces formidable competition from the Google Cloud Platform, Microsoft Azure, IBM SoftLayer, and other companies. HP just announced the impending closure of its public cloud. Dell is buying EMC — which is a part owner of VMware — and consolidating the Virtustream public cloud with VMware’s vCloud Air public cloud services.

Here’s a chart showing AWS revenue growth in recent quarters, compared with the numbers Amazon previously disclosed in order to give investors an idea of AWS revenue, the “Other” category for North America revenue: 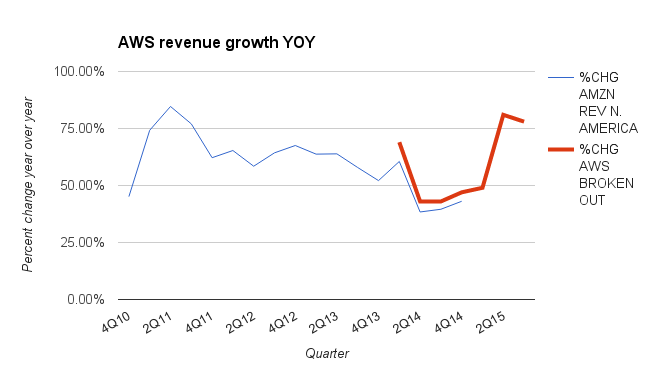 Above: A chart of AWS revenue growth for the third quarter of 2015.

Amazon stock was up more than 10 percent in after-hours trading immediately after the earnings release dropped. Find our coverage for Amazon’s third-quarter earnings here.