Updated at 3:42 p.m. Pacific to include correct revenue and growth rate figures.

Yes, the public cloud is growing — but market leader Amazon Web Services is seeing its growth start to slow down.

In the first quarter of 2014, the growth rate for Amazon’s “other” revenue — which includes the Amazon Web Services public cloud business as well as advertising services and co-branded credit card agreements — came in at 60.53 percent year-over-year.

Compare that with a year ago, when this chunk of revenue grew 63.76 percent year-over-year, or three years ago, when it was 74.21 percent. 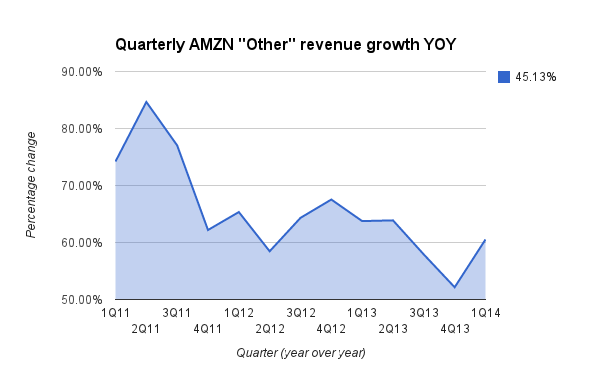 Similar results came at the end of 2013.

The fall from the glory days of past years comes as public clouds from Google, IBM, and Microsoft look increasingly formidable. But let’s be clear: Amazon is still showing growth in AWS, and in enterprise cloud services, it’s far and away the market leader.

Enterprises are deploying more mission-critical applications on Amazon’s cloud, and the appeal of competitors appears to be expressing itself in the form of Amazon’s very robust cloud-and-other-stuff revenue (which was $1.2 billion for the quarter, in case you’re wondering). 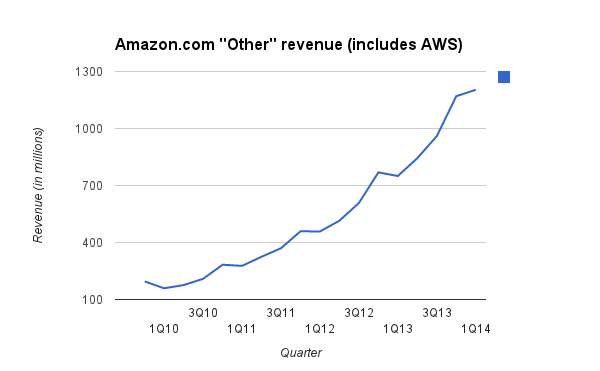 Not one to rest on its laurels, Amazon kept making cloud headlines last quarter:

So what’s the trouble, then?

Despite its price cuts, Amazon might be still charging too much. Lower-cost services like DigitalOcean are growing fast, and plenty of people are going there from Amazon.

Google has lowered its prices to levels that make Amazon scramble. Geographical availability is a strength for Amazon in comparison with Google for the moment, and that might be a place where Amazon could focus its efforts.

And Amazon could stand to focus more on technology and services that could attract companies relying on their own on-site data centers.

Microsoft and VMware have been targeting private clouds in their cloud strategies, and Amazon might want to pay more attention there. That might not be sexy, but it’s where loads of IT spending resides.

It’s one thing to do good business with startups and a handful of enterprises. It’s completely different to become the go-to provider for everyone. And although Amazon has led the way for the past several years, it needs to work harder to return to and even exceed its cloud-growth glory days.