After giving people a glimpse of the size of its Amazon Web Services (AWS) cloud computing business once every quarter for the past eight years, Amazon for the first time today disclosed AWS’ real finances. And they are staggering: Amazon Web Services generated $5.16 billion in revenue in the year that ended on March 31.

AWS generated $265 million in operating income from $1.56 billion in revenue in the first quarter of 2015, Amazon said in its earnings report. The revenue figure is up 49 percent year over year. It’s a sizable chunk of the overall quarterly revenue of $22.7 billion for tech giant Amazon.com, of which AWS is a subsidiary.

AWS brought in $660 million in operating income in 2014, according to today’s filing.

Earlier this month, Deutsche Bank estimated that AWS annual revenue would be about $6 billion, according to a Forbes report. Citi forecasted $4.6 million in revenue in 2014 (Amazon beat that with $4.64 billion) and $6.6 billion for 2015, Business Insider reported. J.P. Morgan analyst Doug Anmuth expected negative margins from AWS, Barrons reported today. And that was wrong.

The AWS business leads the cloud infrastructure market, ahead of Google, Microsoft, IBM, VMware, and many other providers. Last year, analyst firm Gartner estimated in a comprehensive review of the industry that AWS had five times more computing capacity than the 14 other vendors considered for the report.

Amazon released the first AWS products, the EC2 computing service — offering virtual slices of physical servers in Amazon data centers — and the S3 object storage service, in 2006. AWS has kept an edge on competitors with major feature releases, more data centers around the world for providing its services, and price cuts for several of its services.

This style of execution has caused several major tech vendors, including HP and Rackspace, to change their approaches in the cloud-infrastructure business. And it’s reasonable to expect that trend to keep playing out given how much of a lead Amazon has.

Here’s a chart of AWS revenue for the past five quarters: 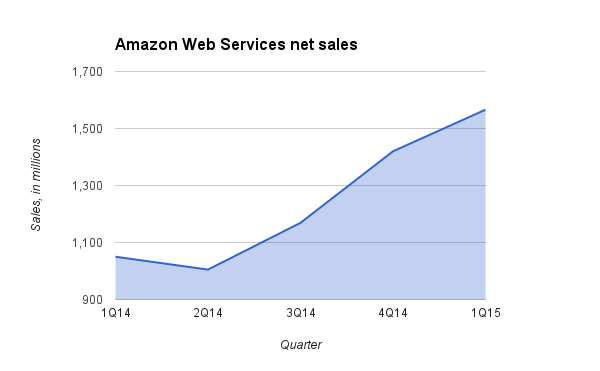 Above: AWS net sales according to 1Q15 earnings release.

As I’ve said before, though, AWS’ revenue growth has been on a general decline over the past few years. It’s not the big new cloud it once was. 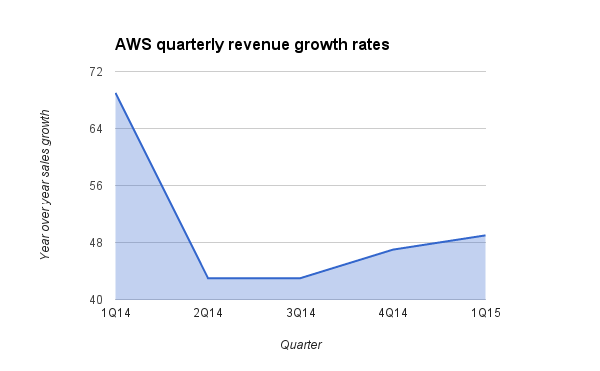 Above: AWS revenue growth rates, according to date from Amazon’s 1Q15 earnings release.

This chart of the past few quarters’ growth rates does not show the trend, because data on AWS is only available for the past five quarters. But as Amazon breaks out more info on AWS in the next year or so, the trend should become more obvious.

Here’s AWS revenue growth charted against the data Amazon has previously disclosed to give people a sense of the scale of AWS — as part of the “other” revenue for North America, which included miscellaneous items like advertising services and co-branded credit card agreements. 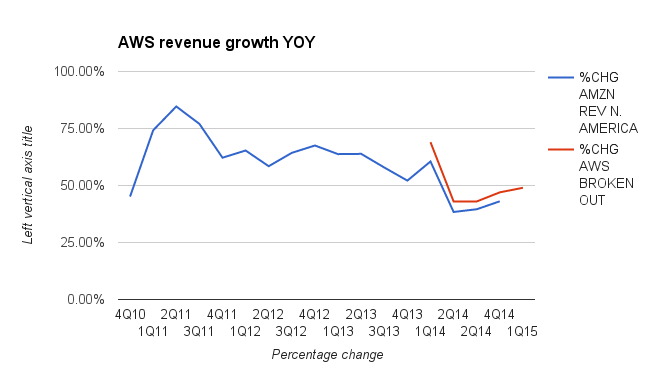 In the first quarter of this year, Amazon’s cloud made plenty of news. Here are some of the biggest stories:

Amazon stock was up more than 6 percent in after-hours trading following the company’s earnings call.

Updated on April 25 to include a chart comparing exact AWS revenue with Amazon’s “Other” revenue for North America, which included AWS among other things.