Stand up. Sit down. You forgot to run today. Did you achieve your step count? Don’t forget to log your calorie count into that fitness app.

We’re inundated by a swarm of health-related applications and often face pressure to add data to them in order for these services to spit out information that we then need to figure out. And it’s not just applications, but devices as well. Millions of people are paying for wearable devices like FitBit, Jawbone Up24, Garmin, and Misfit, but can anyone make this simpler? Entrepreneurs Amber Case and Chris Dancy both think they can, and so they’re working on a new service that’ll let you just live your life instead of worrying about the data.

Meet Compass, a free app that hopes to reframe the way we view our fitness and health data. Produced by Case and Dancy’s company Existence and available in private alpha, it’s a dashboard that shows you how much time you’ve spent doing certain activities but in a compressed and organized way to help you get the right insights with the least amount of attention. “You’re a human and you know the context,” says Case. What makes Compass interesting is that it doesn’t have to sync with a wearable device — just your phone. The question the team asked itself, says Case, was “what is it that you can expose just by your phone? If you put your phone in your pocket, what can you get from it?” 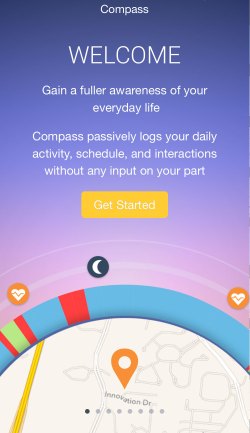 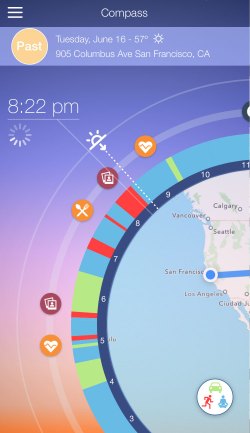 If Case’s name sounds familiar, it should. A serial entrepreneur, she’s the former cofounder and CEO of location-based software company Geoloqi, which was acquired by Esri in 2012. As a cyborg anthropologist, she’s spoken out about privacy protections and data ownership, as well as where the wearable computing space is going.

Dancy has been billed as “the most connected human on Earth,” and he explained to VentureBeat that prior to the conception of Compass he had been tracking 600 pieces of data about his life (e.g. the temperature in his house, when he was eating, etc.) to discover if there was a correlation between certain behaviors and feedback loops. In short, he looked at the data to find a way to “carve out a better version of himself” and he felt the best way would be to make something invisible visible.

The two met at CyborgCamp when Dancy approached Case about his experiment and to see if she would become involved in an endeavor to help the general public by promoting Calm Technology. Coined by Mark Weiser and John Seely Brown at Xerox PARC in 1995, the concept centered around the thought that in an age when technology dominates our lives, the scarcest resource will be attention. “What’s going to win is technology that gets out of our way,” says Case. 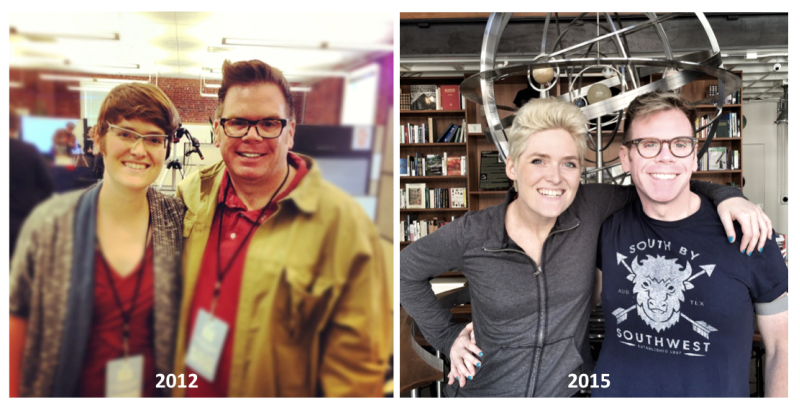 Above: Amber Case and Chris Dancy in 2012 and 2015, before and after Dancy tracked his data.

Through the phone, Compass records many of the metrics that you’d normally get through other fitness apps, but without your having to buy a wearable device. It monitors your activity, whether you’re eating, moving, or sleeping, along with your location and environment, to determine how you are.

But, Dancy stresses, the difference with Compass is that his app offers words of encouragement and no shame. He states that the algorithm in the app will monitor your activity and could send one of 19 “cards” to offer insights into why you’re feeling the way you are. It doesn’t provide you with mandatory corrective steps, but nudges you to think about your day. You know your life so you know what you need to do — an app isn’t going to be the one to tell you. 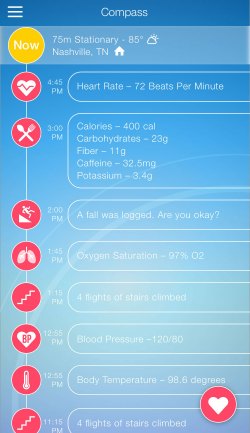 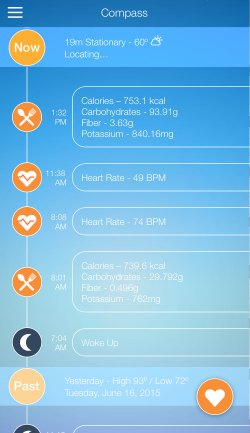 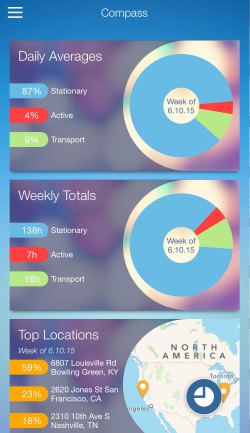 “You read whatever you want from it,” Dancy tells VentureBeat. “It may not be actionable, but it’s also not hating you. If your company wants access to my biological information and doesn’t have the decency to ask ‘are you okay?’ then that’s not cool. It’s about highlighting the desired behavior over the negative behavior.”

Compass has been careful to ensure that its advice doesn’t run afoul of the US Food and Drug Administration (FDA); there are specific things that the app cannot tell users as they must come from a licensed healthcare professional. And there’s also been some concern about privacy, but Case tells VentureBeat that it’s not an issue. All data used by Compass is stored on the phone. Users can download their data in a CSV format, but should they replace their phone, it’s currently not possible to import or transfer data.

As it’s in private alpha, Case and Dancy have been slow to give people access and while it’s well-designed, there are a few things missing. The team hasn’t really focused on the app’s consumption of the phone battery, nor really explored the full potential of data backup and export. Case says that it’s important to take the community’s feedback seriously and releasing the app to people bit by bit can go a long way toward ensuring that the people getting the most out of it have a say.

Here’s the thing though: The market for fitness, health, and lifestyle monitoring apps is constantly growing, so does Compass really have a strong position over all the others? It’s rather late to the game, following the IPO of FitBit, the acquisition of MyFitnessPal and Endomondo by UnderArmour, and Facebook’s purchase of Moves in 2014. And what’s to stop Apple or Google from doing what Compass is doing, which could render Case and Dancy’s app irrelevant?

To that last point, Dancy told VentureBeat that it’s about context and the connection to everyone else. He cites a situation where Compass might be able to know in advance when you have symptoms leading to a potential depressive episode. The app could then send you “decent” notifications suggesting people you could contact if you needed it. “Really good technology helps connect you with others. Technology can’t fix you but it can connect you with people that can help out,” says Dancy.

There’s also a concern about monetizing the service — how would Compass leverage user data if the team is a staunch advocate of privacy? Some may suggest that the company charge a fee for data storage or perhaps employ a freemium-like model where additional metrics are available for a cost. None of these things were disclosed by Case or Dancy and in an alpha state, it’s just too early to tell what the company will do.

Case says that her team is targeting an October public release.