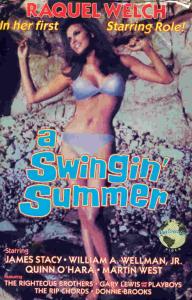 BMC (or B-Movie Classics) is AMC’s attempt at expanding the video offerings on its core destination site. However, instead of featuring the network’s prime time or original content, BMC allows users to stream campy, niche films from the golden age of Hollywood. At launch, the site has licensed 27 full-length B-movie staples like “Hercules Unchained,” “Dark Star,” and “Corridors of Blood,” with many more due in the coming months. The films are currently ad-free and viewable full-screen through AMC’s embeddable player.

Mac McKean, vice president of AMC’s digital media branch, says the new site was designed to leverage AMC’s current pool of classic movies to create a genre-specific hub for online viewers. It’s unlikely that many (save for the most diehard B-movie cinemaphiles) have been itching to see some of the films in BMC’s catalog, but McKean’s explanation still makes a lot of sense. When networks like AMC purchase the licenses to air in-demand content, they typically end up purchasing less than desirable titles as part of the deal. Rather than letting those second (or third) rung titles collect dust, it only makes sense to repackage them for a niche audience.

Naturally, this raises the question: What does AMC stand to gain from pushing this content online?

Put simply — inexpensive promotion of its core brand. When it comes to pairing advertising with online video, top tier content is always the easier sell. However, B-level and niche content can be a little more problematic. Rather than finding advertisers for quirky movies like “Terror Beneath the Sea,” it makes more sense for AMC to make a show out of offering the titles online for free. For B-movie fans the appeal is obvious, but the strategy should also attract a number of people who are enticed by the concept of “free.”

Will this ultimately equate to tons of traffic for BMC and its streams? It’s hard to say. Content providers are just starting to explore the ‘long tail’ advantages of offering older titles online. In therory, a collection of niche followings could add up to a sizeable bump in traffic. Of course, for that to happen BMC would have to be the first of many niche sites.