Advanced Micro Devices will provide the central processing unit (CPU) and graphics processing unit (GPU) that will become the heart of the Sony’s next PlayStation home gaming console, which could debut in 2020.

In some ways, that’s no surprise, as Sony has worked with AMD for more than five years on the inner hardware for the PlayStation 4 and PlayStation 4 Pro consoles. This was AMD’s deal to lose, and it has won it again.

Of course, the third-generation Ryzen, eight-core CPU seems like a fresh piece of hardware now. But by the time it comes out in a PlayStation 5, it will be less powerful and less expensive than what Intel and AMD can provide on a high-end PC by 2020. That’s the reality of game consoles — which use older technology and need to hit a consumer price of around $400 or so — and gaming PCs that can cost $1,000 to $2,000.

AMD is launching the tech on the PC this year. It has it will release its 7-nanometer Zen 2-based CPUs for PCs, the third-generation AMD Ryzen desktop CPUs in mid-2019. Its first 7-nanometer Navi-based Radeon GPUs will debut on PCs.

The challenge for game console designers like Mark Cerny, system architect on what Sony is calling “next-generation hardware,” is to choose a technology that seems like it can create a generational difference in visual processing. In this case, the GPU will support ray tracing, which simulates how rays of light interact with 3D environments, bouncing off of objects and producing secondary lighting effects and more complex shadows and bright spots. Cerny also noted 3D audio would be better on this device, and it would be PlayStation VR compatible.

“AMD won this for a few reasons, first and foremost because AMD has executed flawlessly over five years on Sony’s console projects,” said Patrick Moorhead, an analyst at Moor Insights & Strategy, in an email to GamesBeat. “While there is some intellectual property AMD can leverage from its scale investments, this is a huge resource and design commitment by AMD as it builds many capabilities that can’t be reused. Also, I believe it has resulted in a more challenging premium discrete GPU capabilities as AMD has to target the mid-range of the GPU stack as its “design center.'” 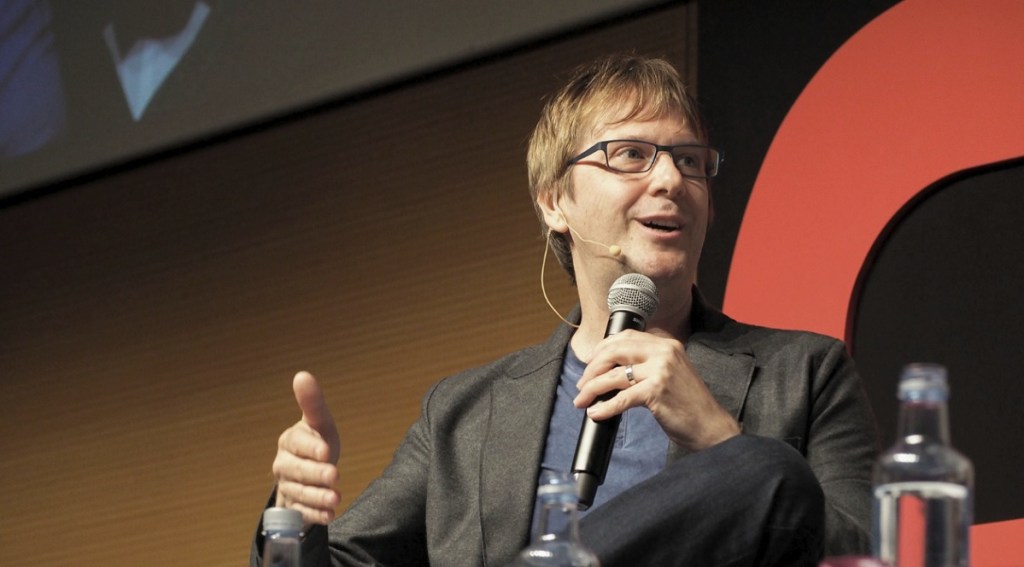 Above: Mark Cerny started making games at 17 at Atari. He went on to become the architect of the PlayStation 4.

AMD and Sony did not actually say that the CPU and GPU are separate chips. Kevin Krewell, an analyst at Tirias Research, is betting that the Zen 2-based, third-generation, 7-nanometer Ryzen CPU and the Navi GPU will be separate chips, glued together with a data pathway dubbed Infinity Fabric. This single module houses both chips and lets them operate as if they were one.

“Multichip modules are increasingly common in the data center, and AMD knows how to do this,” Krewell said.

Onstage at CES 2019, AMD and Microsoft said they’d be partnering on future platforms. Krewell said he expects Microsoft will offer its own custom tweaks that will make its CPU and GPU very different from Sony’s. Nintendo is expected to use a future version of Nvidia’s ARM-based CPU and GPU, though no announcements have been made on that front.

Regarding the AMD news, a spokesman for Nvidia said, “This is one more sign of the growing momentum of real-time ray tracing since we introduced our Turing RTX GPUs last year. The excitement among developers and speed of industry adoption is remarkable. In recent months, we’ve seen the introduction of standard APIs, integration in major game engines, multiple Triple-A titles and support enabled in millions of hardware products. It all points to an exciting future for gamers.”

The advantage of using AMD is that it will very likely be able to move the technology forward with a new manufacturing generation and combine the two chips onto a single piece of silicon. That will bring down costs dramatically over the lifespan of a console, as the CPU and GPU tend to be the most expensive things in the box. This continuous improvement and miniaturization allow game console makers to continuously cut the price or add more features into the box over time.

Intel hired AMD’s graphics guru, Raja Koduri in 2017. And he has said Intel is working on a better standalone graphics chip. But evidently, that was too late to be considered for this product, Krewell said.

“If it were a year or so later, that might be a different story,” Krewell said.

Cerny also said that the next-generation hardware will have a solid-state drive (SSD), which could provide faster load times than standard hard drives. In a demo for Wired, one scene that took 15 seconds on a PlayStation 4 can load in 0.8 seconds.

It will also still use physical media, like possibly a Blu-ray disc, for game delivery. The console will be backward compatible, thanks to the AMD legacy. Cerny hinted that there will be more news coming on “cloud gaming,” which Microsoft and Google are promising as well.

“AMD’s customer fabrication business was financially and technically better suited to this segment, in effect they had the right square peg for what is clearly a square hole, and they have been executing sharply,” he said in an email. “As a result Sony is happy with AMD, would resist replacing them anyway, and AMD’s competitors both don’t have the right product nor do they like the margins so they won’t take the needed effort.  AMD pretty much owns this segment, I expect Microsoft to renew with them as well, and should continue to do so as a result.”

Google’s Stadia will use AMD Radeon graphics in the data center to provide games that are streamed over the internet to players in their homes. That technology enables great benefits such as the ability to play any game on any device, but it tends to lag behind the leading edge of PC gaming.

“Rumors of the PS5 have been floating around for almost a year now. After Nvidia’s big roll out of ray tracing last fall, AMD has been cautiously quiet on its plans for ray tracing support. Nonetheless, rumors emerged about the PS5 supporting ray tracing,” said Jon Peddie, analyst at Jon Peddie Research, in an email. “Now, the AMD GPU in the PS5 will be a custom variant of the Radeon Navi family and will support ray tracing. Ray tracing is the new shiny thing, and like VR is completely dependent on good, meaningful content.”

He added, “Sony has always been good at content, that’s why people bought 90 million of their PS4s. Sony has also been one of the only (some say THE only) companies to offer a satisfying VR experience and system — and again it’s reflected in their sales — more than anyone else, almost more than all them combined. And last but not least, Sony is in no rush to get the PS5 to market. That means they have, and will take, the time needed to do ray tracing right.”

Peddie also said, “The AMD processors are first-class, but they are not the biggest or more powerful. So just as Sony did with VR, you can expect the games with ray tracing to be efficient, and properly focused. If Sony and AMD deliver a satisfying ray tracing experience on a custom AMD APU, that means the hardware cost for PCs to offer similar results will be less. So Sony and AMD are moving the bar, and putting ray tracing in the reach of everyone, not just ultra-rich hyper PC gamers.”

Update, 9:53 a.m. with AMD and Microsoft announcing a partnership on future platforms onstage at CES 2019.